What is it with David Copperfield and Charles I? There's Mr Dick and his 'Memorial', into which the story of the doomed king keeps intruding. Then there's the statue of Charles I at Charing Cross, which David sees on his visit to London towards the middle of the novel.

But what of this? Adams, the head boy at Doctor Strong's school, calculates how long it will take the teacher to finish his Greek dictionary.


He considered that it might be done in one thousand six hundred and forty-nine years, counting from the Doctor's last, or sixty-second, birthday. (Ch. 16) 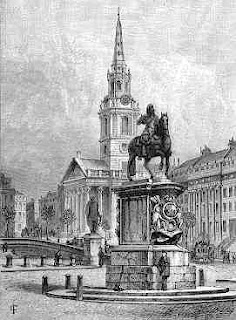 Posted by The Brooknerian at 11:58