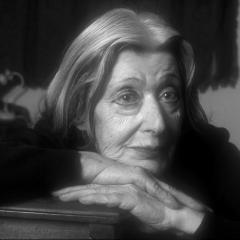 I am apostolic about the novels of Edith Templeton, a Czech who writes in impeccable English: they are extremely restrained and tell strong stories about life in old-style central Europe, with recognisable passions and follies. Lovely, lovely novels.

In the 1980s Anita Brookner wrote introductions to several of Templeton's novels, published by Hogarth. I haven't read them, so cannot comment, but I recently got hold of The Surprise of Cremona (1954), a travel book reissued in the 2000s with an introduction by Brookner:


My only meeting with Edith Templeton took place in her flat in Bordighera some time in the mid-1980s. I found an isolated and eccentric woman: I saw from the expression on her face as we were introduced that the same judgement had been passed on myself.

Earlier, in the Spectator (here), Brookner had spoken of this rather delicious encounter (and in Bordighera too, a setting for Brookner's 1985 novel Family and Friends):


I met her once, in her flat in Bordighera, where I went to interview her; I found a tiny distracted woman with a plaintive voice, eager to talk about anything except her work. When guided towards literary matters she became icily and pungently intelligent. I carried away with me an impression of a central European Jean Rhys, a natural expatriate, but in this instance devoid of the self-pity which makes Jean Rhys so monotonous. Sly, well-born, homeless, but unflappable, it was easy to picture her taking up temporary residence in various old-fashioned watering places, sipping coffee, and training her gaze on the complacent residents. Bordighera, with its beneficent sunshine and well-ordered appointments, seemed as good a place as any, since she could be relied upon to discover, behind its temperate façades, evidence of malpractice, betrayal and opportunistic sex.


Like many travelogues The Surprise of Cremona is a little on the boring side - but pleasantly boring, stylishly boring. The tone is patrician but not grand. Edith Templeton is in several ways a Brooknerian traveller - an exile, alone, watchful, often to be found in art galleries - but also better connected, more social: always ready with her 'letters of introduction'. But we learn very little directly about Templeton herself. She stays on the surface, is restrained to the point of coldness. But her medium is clear: we can see, or may think we can see, through the ice to the likely emotions beneath.

She is good on café life and hotel life. She suffers setbacks but remains apparently blithe. She wears her learning lightly. She takes us not only to Cremona but through Parma, Mantua, Ravenna, Urbino and Arezzo, and in each place she knows exactly where to go. She is a sophisticate and a stylist and her descriptions are acute. A female hotelier has an 'air of devilment'; a professor gives 'a winsome leer with his dusky ruins of teeth'. But Templeton, though rakish and exceptional in the 1950s, has perhaps an uncertain literary status in the twenty-first century, as Brookner points out in her introduction. Templeton's over-confident self-consciousness, her self-sufficiency, may well render her extinct as a type.

The book finishes, and must finish, with the writer's arrival in Como, where she meets her Aunt Alice. The magic enchantment of lonesome travel is at an end. 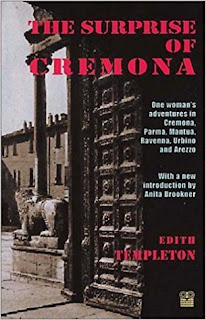 Posted by The Brooknerian at 17:47