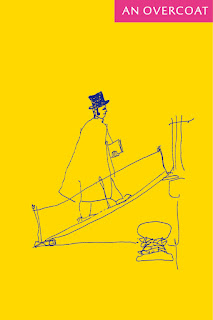 We had the recent post* about the after-dinner cigar, and one from a short while back on the connections between or among Brookner, Sebald and Stendhal, and yesterday I enormously enjoyed reading a text** by Jack Robinson (Charles Boyle) from CB Editions, An Overcoat: Scenes from the Afterlife of H. B.,*** which I discovered by chance in the Guardian Review.

The text is powered by its footnotes - and what pleasure there is in finding on pp. 4-5 a quotation from Brookner's 1980 TLS review of a Stendhal biography, collected in Soundings: 'Anita Brookner', says Robinson, '...approves [Beyle's] furious attempts "to measure up to the rules of the game, even when [my [i.e. Robinson's] italics] there was no game being played".'****

The other echoes are numerous.


Beyle, while watching a mosquito bite on his ankle, remembering that it is always better to be in love than not in love - even if there is no chance, ever, of that love being reciprocated (p. 61)

made me think of Stendhal-fan Sturgis in Strangers, wishing that he were in love:


Only in that climate of urgency could he make decisions. (Ch. 15)

There are other lines that might be applied to Brookner:


More than a spy, Beyle is a double agent, working for both sides (... Classicism/Romanticism, art/life), and he knows it's pointless to deny it. (p. 84)


Beyle asks if I've read Flaubert's letter to Louise Colet in which he spoke of writing 'a book about nothing, a book ... held aloft by the internal force of its style' (p. 37)

Lastly we have Beyle's final collapse, discussed in an earlier post, and in An Overcoat confirmed to have taken place in the rue Neuve des Capucines, though the question of where he was taken afterwards isn't entered into.

An Overcoat is brilliant, absorbing, strange, and highly recommended - not just for Brooknerians.

*Disappointingly no one could identify the cigar quote, but An Overcoat sent me back to the Brookner essay mentioned by Jack Robinson. Here Brookner, some years before A Friend from England, uses the cigar line, describing it as a 'fine dandyish moment'.
**Not a novel - too short, and too essayish. A novella? Autofiction? Travelogue? 'Fiction / non-fiction', it says underneath the book's barcode.
***I.e. Henri Beyle
****The quotation in Soundings is very slightly and unimportantly different. Perhaps the original TLS piece was differently phrased. On another point, the games-playing line recalls a similar one highlighted in a post of mine on Brookner and Rosamond Lehmann.
Posted by The Brooknerian at 10:02