The reason people don’t read Scott anymore is that they think he’s prolix. They are right. There’s no getting around the fact: he’s a deeply prosy, long-winded writer. If the only thing that will hold your attention is a string of staccato action set-pieces you will surely struggle with him. But the secret to enjoying him is to accept this. Instead of impatiently yearning for things to hurry up, you need to surrender yourself to the prose, to sink into it as into a warm bath.

Adam Roberts, 'The Victorian novel: a guide to reading in lockdown', Spectator, 16 May 2020


Adam Roberts was one of my teachers at university in the early 1990s. He's still there but is now also an acclaimed science-fiction author. His recent Spectator recommendations gratify me in that they accord with my own preferences: Scott (The Antiquary, Rob Roy, The Heart of Midlothian), Thackeray (The Newcomes) and Eliot (Daniel Deronda). I applaud his impeccable taste, in particular his defence of Sir Walter Scott - in which happy task he joins no less than Virginia Woolf.

I happen to be reading Rob Roy at the moment, and I read The Bride of Lammermoor a few weeks back. I agree with Professor Roberts that Bride is uncharacteristic - over melodramatic - and Rob Roy a masterpiece. In essence it's a Waverley encore, but so much more assured.

I found a different sort of melodrama - arch, brittle - in my reread of The House in Paris. If Scott is a warm bath, Bowen is an icy shower. One should not perhaps read for style alone, but for me it's Bowen's chief strength:


Round the curtained bedhead, Pompeian red walls drank objects into their shadow: picture-frames, armies of bottles, boxes, an ornate clock showed without glinting, as though not quite painted out by some dark transparent wash. 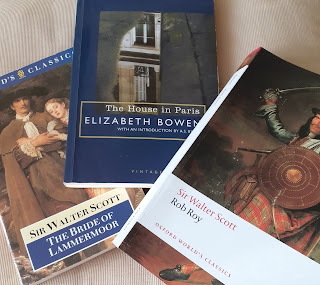 Rumour has it the sky has seldom been as blue since pre-industrial times. One is reminded of the skies of Tiepolo, or of Boucher - as experienced so memorably at the Wallace Collection by the protagonist of Brookner's A Family Romance.

Posted by The Brooknerian at 17:50 No comments:

Posted by The Brooknerian at 15:26 No comments:

Despite many appearances to the contrary, James's novels are tightly plotted. Even the late masterpieces, The Wings of the Dove or The Golden Bowl, apparently so distanced and cerebral, harbour sensational conspiracies at their heart. But in the latter novel James, in the second half, turns the tables - on the conspirators, and on the reader - as Maggie becomes less victim than victor.

The growth of her feeling of suspicion is difficult to trace but it predates the moment of revelation, that 'first sharp falsity she had known in her life, to touch at all or be touched by; it had met her like some bad-faced stranger surprised in one of the thick-carpeted corridors of a house of quiet on a Sunday afternoon'.

'Stories with a twist' - and in the Brookner canon one thinks of the last-minute reveals in Providence, Undue Influence and others - involve legerdemain, also often a degree of bad faith between writer and reader: we who have been led to believe one thing must now accept a quite different interpretation. Perhaps the narrator - and use of the first person is common - has betrayed enough clues; perhaps the author, somehow from behind the scenes, has been able to telegraph alternative truths; but the mystery's solution cannot but feel a little of a cheat.

Or there is James's way, in The Golden Bowl. In the second section, 'The Princess', James all but starts another novel, this time from Maggie's point of view. Patiently, stealthily, she begins the process of her own survival: it is she who is the novel's true conspirator, and the quiet house is Maggie's creation, and a trap for her unwary, her almost innocent foes.
Posted by The Brooknerian at 14:38 No comments: