The much-loved Backlisted podcast (here) returns with a 'lockdown' episode that includes a lot of Anita Brookner talk. Prompted by discussion about Hotel du Lac, never the most representative Brookner, the chat meanders pleasantly on to the potential for compiling an Anita Brookner 'Top Ten'. At a loose end myself, though this week at the chalkface entertaining the children of keyworkers, I considered the question myself. I'm sure there are similar such lists elsewhere on this blog - I forget, and I don't particularly want to consult them anyhow.

Of course, Brookner - like Henry James, like Trollope, indeed like many prolific authors - passed through phases. Brookner's novels, I contend, fall into three, neatly divided by the decades she wrote in: the raw, vital 80s; the settled magisterial 90s; the bleak, experimental 2000s. A Brookner novel from the 80s seems very different from any of her final works - just as 'James I', 'James II' and 'the Old Pretender' can sound like quite distinct authors.

Another thing: I read Brookner's novels over time, more or less as she wrote them. My affection for certain works is determined by memories of my own life; my preferences at a particular time; associations the novels conjure.

10. A Start in Life (1981). Not actually a favourite, but surely indispensable, if for the astonishing opening chapter alone.

9. Visitors (1997). An elegant character study, and with such a sense of the English summer.

8. A Friend from England (1987). One of Brookner's most disaffected protagonists. Despite all appearances, this is extreme writing.

6. Family and Friends (1985). A superior saga, told in the most exquisite and stylish prose.

5. Incidents in the Rue Laugier (1995). A deeply affecting study of regret and missed opportunities.

4. The Next Big Thing (2002). Often so well-heeled, Brookner's protagonists seem immune from real harm. But for Julius Herz the abyss is opening at his very feet.

2. Look at Me (1983). If only for the heroine's seemingly endless night trek through London: almost apocalyptic.

1. A Private View (1994). Poor George Bland, and his unsuitable passion. Yet Brookner's sympathy is boundless. 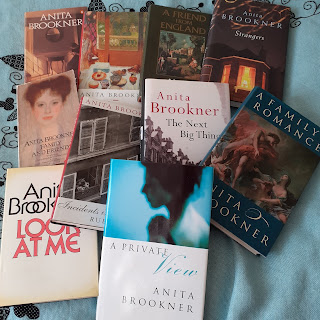 Posted by The Brooknerian at 08:32