Thank You and So Long

Yes, the Gone Fishing sign is going up. The Brooknerian will be taking a break for the while, possibly returning later in the year. Thank you for reading!
Posted by The Brooknerian at 06:13 2 comments:

Remainer? Brexiter? Here's a fun if rather silly way of beguiling the time.

Sir Walter Scott? The knee-jerk response would be to say: High Tory, therefore Brexiter. But many such are Remainers. Scott exalted - indeed, exulted in - the notion of a United Kingdom. He championed the Glorious Revolution and the Hanoverian settlement. He cherished above all else the status quo that had been achieved, and was at pains to show how it might be, and had been, threatened.

I confess my knowledge of Scottish history is sketchy. Before reading Old Mortality (1816) I had no idea the English Civil War in effect continued in Scotland into the 1670s and 80s. I didn't know about the Covenanters and the Killing Time. It was all new to me, and I was glad to be taught.

Scott is brilliant at depicting periods of conflict and divided loyalties. Henry Morton, the son of a Civil War parliamentarian, gets sucked into the war between extremist puritans and Charles II's forces. Events move rapidly. There are battles, marches, a siege, night scenes, and a torture incident that really ought to carry a warning. There are also several love subplots involving high and low characters. All human life is there.

The war scenes are often harrowing, but the novel ends peacefully some years later. We see the story from new and surprising perspectives - perspectives well earned through the course of a tense and chaotic story. There are reunions that are genuinely affecting. There's a beautiful final line, a satisfying resolution as the curtain falls. We see time and change at work, and we see the triumph of Scott's conservative imagination:

Let the tide of the world wax or wane as it will, Morton thought as he looked around him, enough will be found to fill the places which chance renders vacant; and in the usual occupations and amusements of life, human beings will succeed each other as leaves upon the same tree, with the same individual difference and the same general resemblance.

Men, we learn, 'had begun to recover their ordinary temper, and to give the usual attention to their own private affairs in lieu of discussing those of the public'.

One lives in hope, in our own present times, of such an outcome. 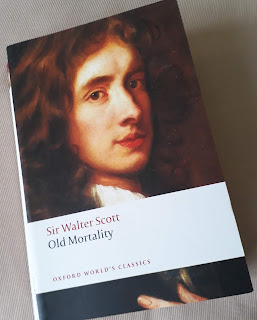 ***
For not altogether illuminating thoughts on Brexit and Brookner, see here.
Posted by The Brooknerian at 17:18 2 comments:

Shortly after Anita Brookner's death, Penguin reissued most of her novels with new covers. Most, but not all. Two novels from the 1980s, A Friend from England and A Misalliance, were missing, but they had been out of print for some decades. I don't know why exactly - except that in an interview in the 2000s Brookner described her early novels as 'crap', and also that she said disparaging things at least about A Misalliance at the time of its publication.

But from the 2016 reissue there were several surprising absences. Where was Leaving Home, or Visitors? Visitors (1997), in particular, has always been considered very highly. 'Almost certainly a masterpiece' - as Brookner once said of another author's novel.

I notice similar things happening to the likes of Kingsley Amis. His novels, following a period of neglect after his death in the 1990s, have been reissued under the Vintage label: period classics. But not everything is there. I don't find two late novels, The Russian Girl and The Biographer's Moustache. Are they not vintage enough. Both are very entertaining, the former especially. Both have the sort of extended drunken scene that no Kingsley Amis novel should be without.

In these ways an author's oeuvre becomes fossilised. In this manner, likewise, wider canons are established. Take the nineteenth-century as represented by Penguin and Oxford World's Classics. All of Dickens, George Eliot and the Brontës are available, but other novelists must suffer the selectiveness of the modern eye. Thackeray is a big loser. Only Barry Lyndon (because of the film) and Vanity Fair (because it's Vanity Fair, I guess) are in print. Even Henry James, a much more fashionable author than Thackeray, isn't completely available. His Confidence hasn't been seen for many years. The case of Trollope is interesting too. He had a vogue in the 1980s and 90s, and Oxford at one point had editions available of every one of his forty-seven novels. But now we're back to the basic rump of the Barsetshire and Palliser series, plus a rather random batch of standalone novels.

Recently I've been reading Sir Walter Scott. Only about half of his novels are in print, and the criteria for selection fascinates me. Why Old Mortality but not Woodstock? Why Kenilworth but not Fortunes of Nigel? (I think The Fortunes of Nigel is probably disregarded because of its distinctly risible title.) Of course everything is now to be found online, ready to be downloaded on an e-reader. But sometimes one wants the guidance and consolation of a scholarly editor - especially with Scott.

The future probably isn't bright. Economic factors play as much a part as literary taste or judgement. I can foresee only a gradual shrinking of the canon.

Let me finish with Samuel Richardson's last novel, Sir Charles Grandison, out of print for some decades. It was very popular in its day, and Jane Austen's favourite. A World's Classics edition was available in the 1980s, but it has never been re-released. It now sells for silly prices.