As ever, Brookner scholar Dr Peta Mayer offers insightful comment (see Liverpool University Press blog here). Her reading (misreading?) of a photograph of a smoking Brookner in a Wildean pose is particularly tangy. I myself have spied in Brookner's images wily references and analogues. Were the photographers in on such jokes, one wonders?

The National Portrait Gallery holds another Lucy Anne Dickens (here), possibly taken at the same sitting as the Wilde shot. (The chair is the same, though not the sweater.)

The chair to the side, the body in profile, the sidelong glance... the lamp... What bells ring in the subversive Brooknerian mind?

I read Hardy as a child, or in my teens. A favourite teacher introduced him, and, alert to signs, I took it as the done thing to consume the lot. At some point I read The Trumpet-Major, possibly in the very edition pictured. I remember little, my reading memory erased by other encounters. Hardy cannot by any stretch of the imagination be deemed a Brooknerian writer. This was but one of the reasons for a prejudice I've maintained to this day. Other reasons include a suspicion of auto-didacts and an impression of awkward style.

Having read, in recent years, a lot of Scott (having exhausted the Brooknerian reservoirs of James, Dickens, Trollope), I idly wondered how Hardy tackled the historical novel genre. The Trumpet-Major has a backdrop of the Napoleonic wars. Real figures - George III, Captain Hardy - intermingle with fictional. Where the novel departs from the Scott model is in its flash-forwards. Hardy cannot resist reminding us that all these people in what's ostensibly a comic tale are long-dead, and that many died tragically in war: long perspectives that break frame and stop just short of heavy-handedness.

The present writer, to whom this party has been described times out of number by members of the Loveday family and other old people now passed away, can never enter the old living-room of Overcombe Mill without seeing the genial scene through the mists of the seventy or eighty years that intervene between then and now. First and brightest to the eye are the dozen candles, scattered about regardless of expense, and kept well snuffed by the miller, who walks round the room at intervals of five minutes, snuffers in hand, and nips each wick with great precision, and with something of an executioner’s grim look upon his face as he closes the snuffers upon the neck of the candle. Next to the candle-light show the red and blue coats and white breeches of the soldiers — nearly twenty of them in all, besides the ponderous Derriman — the head of the latter, and, indeed, the heads of all who are standing up, being in dangerous proximity to the black beams of the ceiling. There is not one among them who would attach any meaning to ‘Vittoria’, or gather from the syllables ‘Waterloo’ the remotest idea of their own glory or death. Next appears the correct and innocent Anne, little thinking what things Time has in store for her at no great distance off.

I suggest this is the Whig view of history, in which history can only be understood by reference to a better, superior present. Scott, conversely, valued history in its own right: it is the present that can only be appreciated by referring to what has gone before, which may have been equally as valid, or more so.

Of Hardy's prose style I now have little complaint. I guess I've educated myself in the time since in the rhythms of nineteenth-century English. Even the auto-didacticism no longer repels. 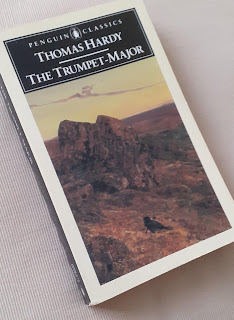 Posted by The Brooknerian at 13:54 No comments: