...he did not in fact write much until the most active part of his life was over, and this of course is what sets him apart as a writer: he has the authority of a man whose preoccupations are not exclusively literary and who is informed at all times by memories of the immense experiences behind him.

Brookner's description of Stendhal, written some years before she herself became a novelist, might easily be applied prophetically to herself. In considering this point, I decided to go back as it were to the beginning, to A Start in Life (1981), which I hadn't read for about twenty years.

I'd always thought of the early novels as a little ungainly, even as juvenilia. This was plainly ridiculous. A Start in Life, though its tone is lighter and wittier than later works, is an assured and in no way immature performance. It is perhaps, to a degree, autobiographical, as first efforts are often reputed to be. But it is far more a knowing deployment of a classic form, the Bildungsroman. It manages, however, in spite of such potentially cumbersome baggage, to be much brisker than, say, Jane Eyre, David Copperfield or Pendennis - or, for that matter, several later Brookners.

We also find plenty of purely Brooknerian tropes. There is a set-piece disaster involving food. There is the dream of foreign travel and of living in an hotel. There are Dickensian minor characters: the spinsters in the Edith Grove flats, the 'elderly young man' who owns the property. There are memories of a richer, more authentic European past: the Berlin furniture that might have absorbed the blood of horses; the merest hint of the wider European picture - 'the raggedness and temporary character of [old Mrs Weiss's] translated life'. And there's lots of literary French. Right from the start, then, Brookner gives us the full Brooknerian treatment, brooks no compromise, sets the bar high, and demands that her readers live up to her standards.

There are one or two missteps - extended passages detailing Ruth's father's exploits, patches of comedy involving a Christian Scientist, a multi-plottedness that such a slim novel can't quite sustain. But soon we're back to Ruth and what we might call pure Brooknerianism. There's a significant passage in Chapter 9, when she recalls childhood holidays - and of course they were to places like Baden-Baden and Vevey: walking, resting, the Kurhaus, listening to a band, looking forward to the hours between tea and dinner​.​

Then we are with Brookner in Paris, taking it by storm, as Balzac enjoined. We follow Ruth on her wanderings, for she is the essential Brooknerian flâneuse. We follow her into the Luxembourg Gardens, where there are always iron chairs, and into the Louvre. We admire, with Ruth, the life of the streets, the quality of the light. We are shown her loneliness. We see her dreams.

In Paris Ruth learns to be Parisian; she learns style, she learns Brooknerian boldness: 'she perceived that most tales of morality were wrong, that even Charles Dickens was wrong, and that the world is not won by virtue'.

Ruth visits Balzacian locations, but they do not yield secrets. She conducts a Villette-style romance. She receives a bunch of flowers in the Bibliothèque Nationale. One tries, of course, to read A Start in Life with an innocent eye, but one recognises and prophesies so much. Not that any of it is mere 'prototype Brookner': it all more or less arrives fully formed.

Interleaved with Ruth's Paris adventures are episodes involving her parents in London. Such counterpoint almost succeeds. Brookner, in giving us George and Helen Weiss, sets out several other stalls, preparing us for Hartmann and Herz, for Julia and Dolly, though the tone here, as I noted previously, is determinedly comic.

The closing chapters of the book gesture towards tragedy, but the writing remains epigrammatic and detached. But again, this is not a run-of-the-mill first novel; it is not juvenile. Brookner knows things:


'About suffering they were never wrong, the Old Masters,' said Auden. But they were. Frequently. Death was usually heroic, old age serene and wise. And of course, the element of time, that was what was missing. Duration. How many more nights would she have to undress her mother, only to dress her again in the morning?

- and once a thing is known it can never be unknown. So we end up with this strange mix of sprightly first novel and later-life disillusionment and sobriety.

In my youth I favoured what is now middle-period Brookner. More recently I've been intrigued by the later works. What, then, have I made of A Start in Life? I enjoyed it - this is scarcely a surprise - but, as I say, I had problems with its tone. Too often, I feel, Brookner dips into the demotic, by way of free indirect style, as in the following:


Mrs Cutler wore her jade green coat and skirt, a silk blouse abstracted from Helen's wardrobe, sling-back court shoes which were murder after half an hour, and her pearl earrings.

It is Mrs Cutler, not Brookner, who would call those shoes 'murder after half an hour'; the effect is awkward and bathetic. And it is perhaps the character of Mrs Cutler who unbalances the novel more generally. But I can't be certain. Is Mrs Cutler a successful character or not? As ever, one is never quite sure whose side Brookner is on. 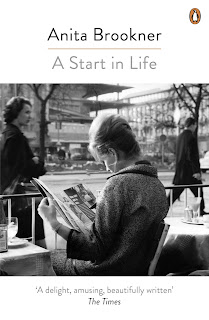 Posted by The Brooknerian at 15:42