On his desk he saw the letter which Simmonds had handed to him as they parted the previous evening, but instead took up his volume of Thomas Mann once more, and sank gratefully into the landscape, so well remembered, so totally familiar, of the bourgeois past.

(A question for Brooknerians: Is Herz the only reader of Thomas Mann?)

In Mann's Magic Mountain, one of my favourite novels, a young man Hans Castorp travels to a Swiss TB sanatorium to visit an afflicted cousin. But slowly he gets ill himself and ends up staying for seven years, during which time he engages with eccentric fellow patients and has philosophical discussions.

The obvious Brookner analogue is Hotel du Lac. But one also recalls Zoe's mother's decline, her invalidisation, in The Bay of Angels. 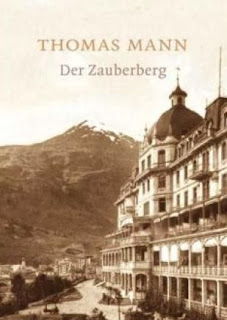 Posted by The Brooknerian at 19:00