Kit Kats in the Refectory: Tales from the Courtauld

Anita Brookner was as likely to criticise my hairstyle as she was my essays on Baudelaire and French Romanticism. As my tutor at the Courtauld Institute of Art, she would hold her classes in a cramped attic study at the top of the building, in those days housed at 20 Portman Square.

'Oh, Katie, we must do something about that fringe,' she would say, offering me one of her untipped Woodbine cigarettes and balancing a small tin on her knee as an ashtray. She wasn’t joking: her own hair was always perfectly coiffed, making her head seem disproportionately large above her tiny, slender frame. She would sometimes be spotted in the grotty student basement canteen at lunchtime, nibbling on sliced-up apple or breaking a Kit Kat into tiny pieces.

Elegantly dressed in camel Burberry sweaters and skirts long before Kate Moss made them cool, Brookner was a formidable teacher who made her students question everything at those intimate, informal lessons. She would throw in personal comments, always appearing to observe our reactions minutely.  It was 1980, and we were in our final year as BA students. Only months earlier the Courtauld’s director, Anthony Blunt, had been exposed as a spy and vanished.

For most of her life she lived alone in a red-brick mansion block in Kensington — describing that old-carpets-and-cabbage smell so evocatively in her novels. She never married or had children — to her great disappointment — but once said she would have liked to have had six sons, in deference to one of her favourite paintings, The Oath of the Horatii by her hero, the French Romantic painter Jacques-Louis David.

While for me her best book remains A Start in Life — I still have my inscribed copy — the last was an e-book published in 2011 called 'At the Hairdresser's'. Its protagonist Elizabeth Warner only goes out to shop or have her hair done. 'I rather hope I shall die at the hairdresser’s, for they are bound to know what to do. At least that is what I tell myself,' says Warner.

I like to think Brookner would be pleased to know that that these days I too go the hairdresser at least once a month. 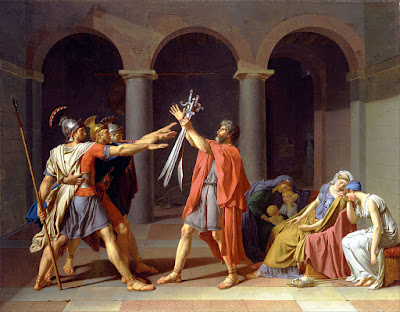 Posted by The Brooknerian at 19:09