I last saw [Anita Brookner] in the summer of 2010, when the publisher Carmen Callil brought her to lunch. She was frailer, and needed a stick. I had made potted crab, to which she said she was allergic, to my embarrassment (should I have known?). Instead she took a little cheese, some green salad and a roast tomato; she declined the beetroot. We asked about her life. She said that she went out early every morning to her Sainsbury's Local for 'a croissant, a petit pain and a loaf'. 'Every day, Anita?' 'I eat a lot of bread.' She had been rereading Stefan Zweig and applauded that most Brooknerianly-titled novel Beware of Pity. She agreed with Carmen that the one advantage of age was that the trials of the heart were behind you. She stated that she had no religious feelings or beliefs at all. She still rented her television (no digibox or Freeview), and still smoked eight or 10 cigarettes a day. 'Do you have your first after breakfast, Anita?' 'Of course.' She had the Times delivered, but when she went out for her hamper of bread she also bought the Independent, Mail, Guardian and Telegraph. She read them all, which took until 10.30. 'There's never anything in them.' I suggested that perhaps she could in future buy just one newspaper, but could tell she was not open to changing her ways, or her expectation of life, at this stage. ('How are the newspapers, Anita?' 'Disappointing').

Elsewhere in this exemplary article Barnes comments: 'I can't think of a novelist less likely to write an autobiography'. Those who are so wary of self-exposure are destined or doomed to be subject to the reminiscences of others. And yet we know how the Brooknerian mind works, because we have all those novels - and it's somehow at odds with the comedy found here, and indeed in most anecdotes told of this most fascinating and elusive of women. By making of her not quite a figure of fun but certainly a lovable eccentric, society renders a difficult person manageable and acceptable: it is a process of enforced assimilation.

But it's a collusive process too. Herz, in Brookner's The Next Big Thing, finds himself giving 'an edited view of oneself that would prove acceptable' (ch. 6). Yet he longs for a fuller and deeper conversation, and bizarrely fantasises about engaging in television interviews, in-depth expansive exchanges in which he might enlarge upon his 'artistic delights' and perhaps at last be himself.

Over Christmas I read Ma'am Darling,* Craig Brown's amusing 'quasi-biography' of Princess Margaret. The book is made up of anecdotes, many of them detrimental to the reputation of the late Princess, who is depicted variously as vain, arrogant, temperamental, lazy, spiteful, ridiculous, stupid, etc., etc.** But at one point Brown wonders:

These 'writers', he goes on (Nancy Mitford, for one), might equally be depicted as nasty and intolerant, resentful of a beautiful, innocent, ignorant young princess. Princess Margaret was no writer, so her account is largely missing from the archives: she was never going to write an autobiography. She was never, at least in print, going to be able properly to answer back.

Brookner never wrote an autobiography either. But indubitably such an ultra self-aware writer wrote very much about herself. And where? As ever we find the real story in the novels. As she herself says somewhere, fiction writers are somehow the only people telling the truth. 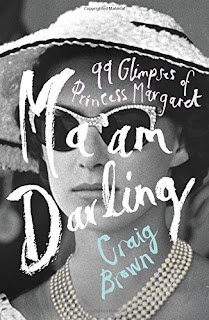 *
* No mention of Brookner in Ma'am Darling. But the Princess swept into her orbit Anthony Blunt and Roy Strong, both of whom had Brookner connections. Here's Strong sitting next to Brookner at dinner:

Virtually her opening comment to me was, 'You have always been the victim of envy'. But later came the more significant exchange. I said to her that I didn't think I could face writing art history again. She looked at me with those extraordinary eyes and said, 'But that's wonderful. For the first time in your life you're free.' How often that sentence has returned to my mind and how grateful I have since been for its articulation, thanks to that chance encounter. (Splendours and Miseries: The Roy Strong Diaries 1967-1987)

*
** On finishing Ma'am Darling I decided to follow up footage and recordings of the Princess on YouTube. This was a slightly disconcerting experience. As she's presented in Craig Brown's book the Princess grows in one's mind into a comic, monstrous, but also, against the odds, rather sympathetic character. But in the recordings she seems smaller, more reserved and dignified, and also more self-conscious, self-deprecating, even self-parodying. One of the high points of the book is a passage on the Princess's appearance on Desert Island Discs. Brown attempts to transcribe her voice:

But listen to the actual programme, and the impression is subtly different, more real, nowhere near as silly and pantomimic. As Anita Brookner once said of a topic that seemed simple, 'But of course such things were never simple; they were at all times complex and sad.'
Posted by The Brooknerian at 06:07