The Humbling by Philip Roth

The book may be short but the style is long: loping conversational sentences convey and dignify the story of Simon Axler, a famous actor in his middle sixties. But his abilities have deserted him: 'Something fundamental has vanished. Maybe it had to go. Things go.' And then his marriage fails and he checks into a psychiatric hospital. Later there's a liaison with a much younger woman, who was once a lesbian, and some risky sex, and the story ends in disaster. 'A man's way is laid with a multitude of traps, and Pegeen had been the last. He'd stepped hungrily into it and taken the bait like the most craven captive on earth.'

The Humbling (2009) was criticised (and ridiculed) on publication for its graphic depictions of sex between the mismatched pair. In fact the scenes are both brief and pertinent, always presenting Axler in a fresh guise: at one point 'spying, lascivious' - perhaps like the greybeards in that Tintoretto painting, Susannah and the Elders, which Brookner invokes more than once. Axler, like Brookner's George Bland or Julius Herz, both is and isn't a 'dirty old man', and this is the book's strength. Like Brookner, Roth doesn't hold back on the physical horrors of ageing, but, again like Brookner, refuses to deny his hero the gift of self-knowledge and self-awareness:


The failures were his, as was the bewildering biography on which he was impaled.

Brookner (surprisingly?) loved her Roth. Surprising? Scarcely. We don't know whether she read The Humbling, but if she did she would have recognised thematic (stylistic too) connections with, inter alia, her own A Private View and The Next Big Thing. The Humbling is indeed a shocking read, but shocking in the best way: as in Brookner, it's the depth of the psychology, the analysis, the clairvoyance, that truly astounds and confounds the reader. 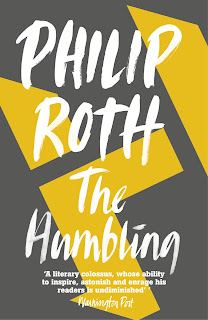 Posted by The Brooknerian at 17:05