Some obvious and not so obvious ideas for a winter break...

St-Sulpice, Paris
Paris is classic Brookner territory, but where to go? The rue Laugier? The old Bibliothèque Nationale, where a young Brookner was once the recipient of a magnificent bunch of flowers? The Luxembourg Gardens, to sit on an iron chair? The Crillon, where, according to Julian Barnes, Brookner was given a maid's room? No, head for the Latin Quarter and the church of St-Sulpice. Once inside, look carefully around the gloomy interior for Delacroix's Jacob and the Angel. It will help if you have a copy handy of Brookner's masterpiece, The Next Big Thing.

Hyde Park, London
Perhaps you want to re-enact Frances Hinton's nightmarish trek across the park and down the Edgware Road towards Maida Vale in Look at Me? Or, for brighter moments, you might wish to drive through the park, like Mrs May on that heady summer evening in Visitors? Hyde Park has it all. Poor Claire Pitt in Undue Influence even wonders whether she might spend an entire holiday there, emerging only for lunch and dinner.

Dijon, France
Provincial France is everywhere in Brookner, from the cathedrals in the north to the Bay of Angels in the south. Choose Dijon because it was there, at a rickety cafe table, that Jane Manning in A Family Romance first 'stealthily' began to write.

Baden-Baden, Germany
Referenced in A Start in Life, Falling Slowly and The Next Big Thing, Baden-Baden is pure mittel-European Brooknerland. Take a ride in a fiacre down the Lichtenthaler Allee to the Casino, where a band will play, or might have done once.

Vevey, Switzerland
The obvious, the essential choice. Spend a night at the Grand Hôtel du Lac. Visit Edith's room. Look out at the Dent d'Oche or, more likely, at a receding area of grey. Walk along the lake, admiring the cutlery. 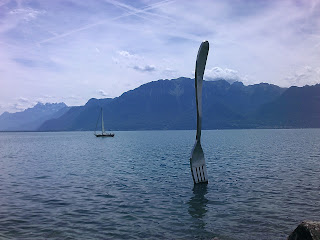 Posted by The Brooknerian at 07:55