It was only August, but the summer was virtually finished. Thick cloud was rarely pierced by anything resembling normal sunshine, and what heat there was was excessively humid, spoiled. Only that morning I had found a large moth spreadeagled on my bedroom wall, with no tremor at my approach. This attitude seemed to mirror my own inertia, although inertia now seemed to me something of a luxury I could no longer afford.

That moth: one is reminded irresistibly of Virginia Woolf and that late essay of hers.


Moths that fly by day are not properly to be called moths; they do not excite that pleasant sense of dark autumn nights and ivy-blossom which the commonest yellow-underwing asleep in the shadow of the curtain never fails to rouse in us. They are hybrid creatures, neither gay like butterflies nor sombre like their own species... 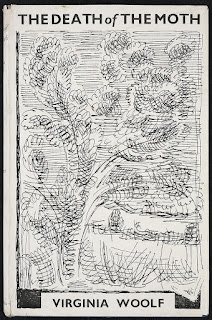 Posted by The Brooknerian at 06:15