On Trollope and Predictability

Trollope for decent feelings, said Anita Brookner when asked whom she read and why. (And Dickens for indignation and James for scruple.) Anthony Trollope is often cited as a source of comfortable predictability, a salve for the troubled. He is certainly comfortable, even at times cosy. But predictable?

John Caldigate is a little-known standalone Trollope from near the end of the author's career. Like other Trollopes from this period, such as Is He Popenjoy?, it constantly veers off in surprising directions, taking the reader into unknown corners of the Victorian world.

But Trollope was always unpredictable. His usual starting point, unlike Dickens or Wilkie Collins, wasn't a mystery, but a moral puzzle. A character has one of several choices to make. What will he or she decide? And when? And what will happen next? The variables multiply. The fascinated reader imagines an ever-branching tree of possibilities.

John Caldigate seems at first a story about the conflict between a father and son. So - the novel will end with a reconciliation? No, that happens early on. Then it's a story about the hero's love for a young woman brought up in a puritan household. We envisage an eventual union. But no again - the girl yields easily, and there's an early marriage. Then we're on board a ship to Australia and there's some repartee under the stars with a progressive, proto-feminist widow. Before long we're in the pioneer goldmines of New South Wales. And sooner than we supposed, we're back in England for a bigamy plot and a trial, which comes earlier in the novel than expected and has an unexpected outcome...

John Caldigate is perhaps the closest Trollope came to writing a 'sensation' novel. But Trollope's surprises are justified and rooted in character. There is an early cavil: the plot depends on whether Caldigate was married in Australia to the woman claiming to be his first wife. Trollope gives us access to Caldigate's rough life in the colony, but stops short of information that the later bigamy trial will depend on. This feels like a breach of faith. But slowly yet surely Trollope smooths it over, giving us over time an impression of what went on, if not every detail. There is really no mystery in the past. The only mystery is in what is to come, as the novel, like real life, puts one surprising foot in front of another. 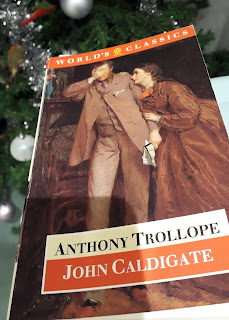 Posted by The Brooknerian at 16:45