The Comforts of Scott 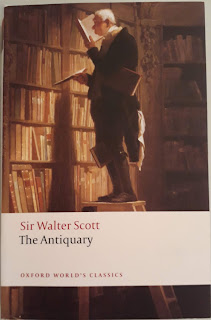 Mr Ramsay, the patriarch in Virginia Woolf's To the Lighthouse, loved it. Nineteenth-century families would act out tableaux from it. The Antiquary (1816), to the Victorians, meant comfort and nostalgia - but of the highest order. It cannot be ignored. Sir Walter Scott, of course, can't be ignored, but The Antiquary in particular must not be lost - however scantly its manifest eccentricities might recommend it.

For one thing it isn't a costume drama with a fast plot. This isn't Ivanhoe. Instead it is the story of a mysterious young Englishman, calling himself Lovel, who arrives in a Scottish seaside town in the 1790s, only twenty years before the novel was written. Lovel comes in contact with Jonathan Oldbuck, the antiquary of the title, a uniquely entertaining and frustrating character, obsessed with books and history. There's a violent storm and a heroic rescue, and it becomes clear that Lovel has some back-story that involves Isabella, a local aristocrat's daughter. But Scott is chary with the details, and the reader must read on, once more fascinated and frustrated.

It's a flimsy story, but weirdly alluring. 'It was early in a fine summer's day, near the end of the eighteenth century...' the novel begins, and who cannot be charmed by such a line? Possibly, I concede, those whose imaginations are less conservative may not be enamoured by Scott's view of the world and the past. They might gasp in disbelief at the minutiae with which the novel concerns itself. They might despair of Scott's depiction of, celebration of, the settled order - typified by the honourable beggar, Edie Ochiltree. But Scott isn't for everyone, and certainly isn't appreciated by most readers nowadays, though he was by many of the Victorians who came after him, and that's why we can't and shouldn't avoid him. We think of the novels of his time and we think of Jane Austen. The Victorians would have said 'Who?', and thought only of Sir Walter. He was a major European phenomenon.

Like her own father Virginia Woolf had a passion for Scott and for The Antiquary. She praised its 'complete presentation of life'. Her father, and perhaps also she herself, always shed tears towards the end of the novel, when Scott's plot meanders (but Scott proceeds through indirection) into an episode of loss in a fisherman's family:


the scene in the cottage where Steenie Mucklebackit lies dead; the father's grief, the mother's irritability, the minister's consolations, all come together, tragic, irrelevant, comic, drawn, one knows not how, to make a whole ... which, as always, Scott creates carelessly, without a word of comment, as if the parts grew together without his willing it, and broke into ruin again without his caring.

Sometimes I fear I may be getting to the end of the nineteenth century. But there is always Scott. If you have never read him, start with Waverley. My favourites are Ivanhoe (I'm in good (?) company here, as Tony Blair was known to keep Ivanhoe by his Downing Street bed) and Kenilworth, as I'm partial to a spot of Merrie England.

Posted by The Brooknerian at 12:08