What I Read in the Holidays

Not to Disturb by Muriel Spark

A very short novel, told almost entirely in dialogue, Not to Disturb (1971) has much in common with The Abbess of Crewe (1974) (see here). Both have preposterous plots, a devious central character, and themes of surveillance and control. In Not to Disturb, Lister is the butler of a grand Swiss establishment. Relations among his employers are such that a murder or murders are imminently expected. The servants - theirs is the only view we get - must make future plans, which include deals with the newspapers and unlikely marriages. Structured in five chapters over the course of a night, the novel is an exercise in form, with debts to the Elizabethan dramatists as well as to moderns like Ivy Compton-Burnett and Henry Green. I didn't much like it.

A 'niche' read, this, if ever there was one. Mrs Osmond, formerly Isabel Archer, has left Italy to attend the funeral of Ralph Touchett. As she wanders a midsummer London and heads back through Paris to Italy, we encounter old friends - Caspar Goodwood, Henrietta Stackpole, the maid Staines - and are reminded of scenes earlier in the story, by which of course I mean Henry James's The Portrait of a Lady. I've never been especially keen on John Banville, finding his prose rather precious and sub-Jamesian, but Mrs Osmond (2017) is surely the book he was destined to write, though it probably wouldn't have been published if he hadn't written it. When it first came out critics scoured the text's consciously Jamesian ventriloquism for solecisms and wrong notes. But the stylistic successes and failures are really all part of the fun and the book's major draw. It is a joy.

A reread, and my summer treat. School spoilt Charles Dickens for me. I remember long lessons doing comprehensions on the supposedly funnier passages, or slogging through Oliver Twist. (One of the problems with teaching Dickens is explaining his use of irony. Too often his tone is taken at face value.) Into my twenties, after an English degree too, I still avoided the author. I made one final effort with Bleak House - and the magic happened. It's a startling book, engrossing and varied, with a wonderful double narrative. I veer between preferring Esther's memoir and the omniscient sections. What I took from this reread was the way Dickens evokes his own past: the 1830s, the pre-railways age, coaching days - as long ago from the mechanised Victorian era of the novel's production as the comfortable analogue age is from our anxious digital world. I was also, on rereading, unnerved by Mr Jarndyce, who seems to modern eyes a creepy character - all that 'little woman' and 'Dame Durden'. Dickens is aware of this (I believe great writers are always as aware as we are, often more so), and anticipates it, making another character, Richard, suspicious of Mr Jarndyce's motives. Dickens continues to insist on Mr Jarndyce's goodness, but the issue remains troubling. And I guess Dickens knows this.

Powell, best known for his twelve-volume sequence A Dance to the Music of Time, was nothing if not a stylist. The style develops over his career, all the way to the exquisite abstraction of his two post-Dance novels of the 1980s. Here, in Afternoon Men (1931), his very first novel, we find everything in place or in embryo - the bohemian demi-monde of artists and writers, the randomness of events, the wonderful set pieces, and, in the writing, Powell's curious combination of voluptuousness and astringency. It's the story of a group of party-goers in early 30s London. As in Dance there's a Powell avatar, here called Atwater (not sure if the closeness of 'avatar' and 'Atwater' is deliberate - probably not), distanced but still involved. The conversation is clipped, maddening, but also suggestive and sad. It's an accomplished debut and makes me want to reread Dance. (I'm a particular fan of Dance, and especially like the wartime trilogy, volumes 7, 8 and 9 - more than a match for Evelyn Waugh's Sword of Honour trio.)

The Hatred of Poetry by Ben Lerner

I've read and enjoyed Ben Lerner's 2014 novel 10:04. But it's autofiction, so while there's an exhilarating sense the thing might go anywhere you also read with a sinking feeling, knowing there'll be no resolution. In The Hatred of Poetry (2016), a novella-length essay, Lerner discourses on the 'fatal problem with poetry: poems', the disconnection between our transcendent notion of 'poetry' ('the ideal Poem') and the limited artefacts ('the ideal Poem we cannot write in time') very few of us produce and many of us (Lerner, it seems, included) rather hate. Lerner's thoughts on the likes of Dickinson, Keats and others is illuminating, but I'm not sure any of it is particularly original (and his understanding of poetic metre is, I'd suggest, a little askew). But the essay ends well, ends novelistically, ends ... poetically (?), in a defence of 'a vocation no less essential for being impossible'. Well worth a read (and the Fitzcarraldo Edition livery makes it extra toothsome). 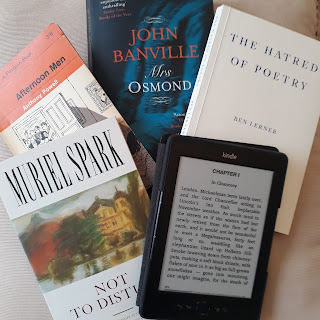 Posted by The Brooknerian at 07:04