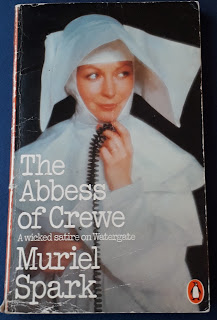 I continue my random survey of Muriel Spark's works in her centennial year with her 1974 novella The Abbess of Crewe, 'A wicked satire on Watergate', as the cover teasingly but rather heavyhandedly puts it. Soon to be re-released (by Polygon in summer 2018), The Abbess of Crewe occupies a truly bizarre and striking place in Spark's bizarre and striking middle period.

Scandal has hit the Abbey of Crewe. Reporters are at the gates; police patrol the grounds. There has been an election: Sister Alexandra was victorious and is now the Abbess. Her rival, the younger Felicity, has run off with a local Jesuit and told her story to the papers. The new Abbess is accused and indeed guilty of orchestrating a robbery and of covertly and extensively electronically bugging the convent...

Abbess Alexandra is Miss Jean Brodie reborn: patrician, charismatic, amoral. Secretly, it is hinted, she believes in nothing - nothing but power. Or nothing, perhaps, but literature, which she intones in place of her prayers.


'I'm in love with English poetry, and even my devotions take that form, as is perfectly valid in my view.'

If the Abbess is Miss Brodie, the Abbey is the school. Though brief and slight, the novel conjures the nuns' enclosed regulated world expertly. Large parts of the narrative are set during the hours of darkness, for the convent is traditional, observing regular prayers throughout the night. This gives the novel a wakeful, edgy quality in keeping with the surveillance theme.

We last see the Abbess blithely travelling to Rome to face an inquiry. But she knows - and we know - that she'll get away with it, that she's luckier and more diabolical than her alter ego Tricky Dicky. Her sins, such as they were, she insists, have entered the realm of myth, of art. And good art - much like this very strange story - 'need not be plausible, only hypnotic'.
Posted by The Brooknerian at 06:39