Starting The Custom of the Country by Edith Wharton

Modern it might be, but it isn't modernist. It's told in steady deliberate sentences, heavy with irony, Jamesian in shape. You need to read the novel slowly, not because it is difficult to read, but because it seems too easy. You need to slow down, weighing each carefully deployed word.

Wharton is both insider and outsider, and in this she resembles her disciple Anita Brookner who provides an Introduction to my Penguin edition. Brookner went through a Wharton 'phase' in the 1980s, and it's fun to spot in The Custom of the Country examples of what I've previously called Brooknerese: 'saurian', 'suzerainty'.

Book One introduces the brilliantly named provincial heroine Undine Spragg - shallow, affectless, materialistic, but also somehow sympathetic - as she enters the 'labyrinth of social distinctions' that is New York. Wharton ably skewers Undine's preferences and pretensions, but is also slightly baffled by her. The novel reads like early Brookner; the Introduction dates from 1987, the year of A Friend from England, a novel also loaded with the semiotics of wealth and vulgarity, and containing in Heather a character as innocent but also as opaque as Undine.

Countering Undine is her lover Ralph, idealistic and romantic - and surely heading for a fall. 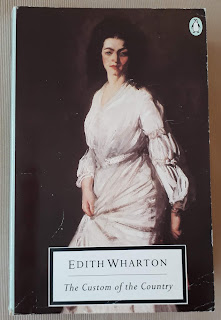 Posted by The Brooknerian at 07:49