[First in an occasional series on Middlemarch - Book by Book:] 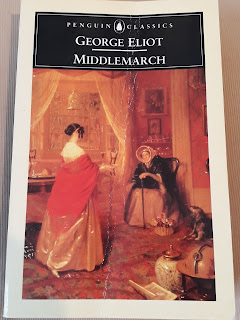 'I doubt whether any young person can read with pleasure either Felix Holt, Middlemarch, or Daniel Deronda,' wrote Anthony Trollope in his Autobiography. Well, I'm not a young person any more, and when I first read Middlemarch, twenty-five years ago, I possibly wasn't the young person Trollope had in mind. In any case he probably had a minor axe to grid against the clever Mrs Lewes. Middlemarch is, after all, a Trollope novel deconstructed; it is The Last Chronicle of Barset with an advanced degree from Heidelberg; it's Barsetshire on acid (or laudanum at the very least).

But it isn't, as Trollope goes on to say, an easy read. It is Eliot's style he criticises her for. It is affected, it lacks ease, he says. Style is the great Trollope thing: that sly tolerant tone keeping the reader company through the inevitable longueurs of a classic three-decker. Eliot's voice is altogether more bracing. She does not compromise. There are indeed passages in Book One where the reader is on his or her mettle. Take the first half of chapter 10, which proceeds from a challenging epigraph to a supersubtle comparison between Casaubon and Ladislaw, and their differing approaches to artistic endeavour. But midway through the chapter the novel sharply shifts gear and we find ourselves enjoying the banter of a group of Middlemarch worthies at dinner. This serves to introduce Dr Lydgate and Rosamond Vincy, and in the next chapter we're treated to a fast-talking breakfast scene between Rosamond and her brother Fred. This veering between high and low, or perhaps high and middle, between seriousness and comedy, is a feature of the book, and the contrasts aren't assimilated in, say, the Trollopian fashion. But George Eliot probably doesn't want it that way.

Middlemarch is a political book, and not just in its depiction of the passing of the Reform Bill. I like, as a sort of parlour game, to track the political sympathies of the Victorian novelists. I like to imagine them in the political world of Britain today. Would Dickens have voted New Labour? Would George Eliot be a Corbynista? We know Trollope stood for Parliament as a Liberal, but nowadays we'd probably call him a liberal conservative. I sense Henry James too would be a centrist Tory - just centrist enough for the tastes of some modern readers. Whereas some of poor Thackeray's current neglect is possibly owing to the jaundiced Right-leaning tone of his novels. Not that George Eliot doesn't send up from time to time the earnest Miss Brooke, who is disappointed to discover the tenants of her betrothed aren't disgracefully poor and therefore in need of her social work:


The small boys wore excellent corduroy, the girls went out as tidy servants, or did a little straw-plaiting at home: no looms here, no Dissent... (Ch. 9)

But the irony is also at the expense of those comfortable folk who might think straw-plaiting a suitable occupation for anyone.

'Fred's studies are not very deep,' says Rosamond of her brother in the final chapter of Book One; 'he is only reading a novel.' George Eliot might have been more comfortable prosing away in some Whiggish paper, but we should be grateful she chose instead the novel, even if her handling of the form feels at times a little schizophrenic. 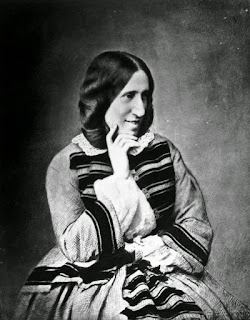 Posted by The Brooknerian at 13:49