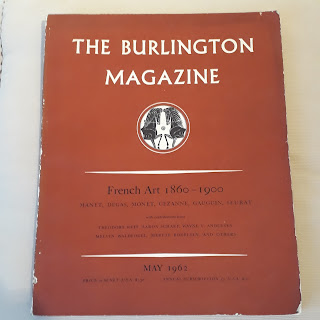 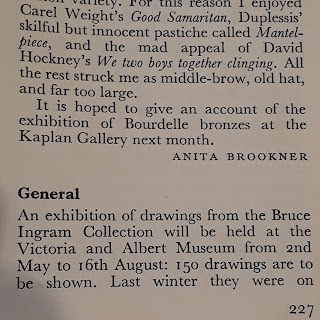 I owe my start in life as a writer to Benedict Nicolson, who was editor of the Burlington Magazine from the end of the War until his death in 1978.


Hearing that Anita Brookner, an all but unknown graduate student, was to be living in Paris, Nicolson 'mentioned that [she] might like to send him reviews of the major exhibitions'. It was, Brookner recalls, an amazing act of generosity. She looked forward to her monthly assignment, making herself known to dealers and collectors, tackling the 'dreadful Salon d'Automne with something like enthusiasm'. Her biggest cheque was for £19.

My copy of the Burlington Magazine dates from May 1962 and finds Brookner, then in her thirties, in London. (She seems to have migrated regularly between the Two Cities, rather like Emma in Leaving Home.)

At the Hazlitt Gallery she is predictably delighted and beguiled by an exhibition called 'Baroque and Rococo'. Immediately she gets to work critiquing a painting by Berchem, Allegory of the Seasons. The tone is learned, amused, ironic, the language a clever mix of the mandarin and the slightly demotic. Things are 'faintly adumbrated' and 'surprisingly overt', a lion is 'rather tame'. Do we hear the authentic Brookner voice, a little in embryo? Take this, of a Vernet View of Marseilles in another exhibition:


In the way that an imitation sometimes does better than the real thing, I found the steady margarine of this sunset more poignant than the careful golden ripples of the archetypal Claude that lies behind it.

The steady margarine... But what we probably also hear is the voice of the kind of patrician art critic into whose heady company a spell at the Burlington surely propelled the young Brookner.

And Miss Brookner reveals her alliances most strongly when viewing a show called 'British Painting and Sculpture Today and Yesterday'. She advises the visitor to seek instruction beforehand in a recent 'B.B.C.' (how antique, those full stops) television programme Monitor a few weeks back, 'Pop goes the Easel', which showed 'young painters having themselves a wonderful time round the rifle ranges, pin-tables, and sex magazines of their native Shepherds Bush': one might as well congratulate a child on its first piece of knitting, she adds. One Peter Phillips 'simply copies in paint the kind of crude device one occasionally sees bobbing between the shoulder blades of a bogus leather jacket'. Plainly this won't do; plainly this doesn't pass Brooknerian muster. But fortunately Miss Brookner is on hand to suggest other places one might 'like to take the young people'.