...exhibited in the Salon of 1800 was the last Jeune fille qui pleure la mort de son oiseau (Louvre) which is not so much a study in double meaning as a fascinating piece of mannerism. The heavy hair has acquired a serpentine life of its own and twines in and out of the knotted drapery. The hands are boneless and affected, the head very large in proportion to the body. The effect is increased by the tired soiled colours...

This is not to say that Brookner's own style ever became affected, coagulated - but that she knew the dangers awaiting an artist over the long term. Greuze painted what his audience and presumably he liked to see, and thereby lost objectivity, thereby grew unable to see his own shortcomings. Brookner certainly had her detractors, though her supporters outnumbered them. And no one was probably as sceptical as Brookner herself - never quite enamoured of the idea of being a writer of fiction, and, while maintaining the integrity of a peculiar and very individual vision, ever alert to the need to keep her colours fresh. 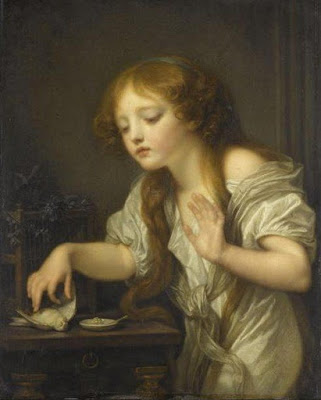 Posted by The Brooknerian at 06:09