What do we think of flashbacks? Generally I'm not a fan. I was disconcerted when I read Fitzgerald's Tender is the Night in the original version, Bowen's The House in Paris, and Larkin's A Girl in Winter, all of which contain lengthy flashback sections centrally placed. In Hotel du Lac the key flashback comes later, two thirds of the way through, and elements of it have already been hinted at. As such it works, but only just.

Edith's misgivings about marriage are about love and its absence: she isn't content with the 'kind looks and spectacles' model of mature romance favoured by the likes of Barbara Pym. But more than that she worries about her writing. Married, she would not be writing. Writing may be 'illicit', rather shamefully 'orgiastic', but it is authentic. We are reminded (again) of Larkin in the poem 'Vers de Société', labouring under a lamp, looking out to see the moon 'thinned / To an air-sharpened blade':


A life, and yet how sternly it's instilled

All solitude is selfish.

This is to be no 'noble jilt' of the Trollopian kind. Geoffrey Long, Edith's ill-fated fiance is dismissed out of hand, condemned for the 'totality of his mouse-like seemliness'. He is, in a word, unBrooknerian, and to Edith's rejection of him the true Brooknerian can only raise a cheer.

For Edith, who seems at times in the novel rather mousy herself, is perhaps in fact a genuine malcontent - nowhere near as extreme a case as, say, Frances in Look at Me or any number of figures in the later novels. But as the full story of her wedding day is revealed the novel finds its feet, Kodak-sharp not only in details of food, clothes, the surrounding streets, Larkinian in their charming ordinariness, but also in its setting out of Edith's emotional rebellion and refusal to be bowed - its setting out also of Edith's rejection of the sort of modern inauthentic life her friends had earmarked for her, and which they themselves seem only too happy to live. There's a small but telling detail buried in the middle of the chapter. Amid the modish vol-au-vents and asparagus rolls of the proposed wedding breakfast is a Nesselrode pudding, an archaic and unfashionable confection, but loaded with significance for Edith, loaded with notions of a better past.


'Pudding, Edith? You must be mad,' said Penelope. 'My mother loved it,' countered Edith, and thought, privately, that her mother would have considered this a puny alliance. 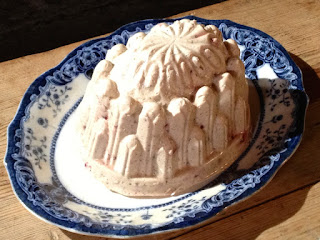 Posted by The Brooknerian at 16:41