'Incidentally, although I have been thinking of Mrs Pusey as a lady, I have adjusted this downwards: Mrs Pusey is definitely a woman ... And the woman with the dog has to be adjusted upwards to lady, or rather Lady.'

Brookner's is a conservative imagination. Characters, however individual, are fitted into established roles and types. The boy Alain, who brings Edith's breakfast, has 'the set expression and also the expertise of a much older servant, a gentleman's gentleman'. Later, in town, there's a reassuring scene in a cafe, with 'sturdy-looking women' drinking coffee and eating cakes, and 'flushed waitresses' hurrying between tables. Brookner, or Edith, looks for the eternal, the unchanging in the human scene.

The chapter proceeds once more through reflection and flashback. Edith wakes; then her mind returns to yesterday evening, and we see how her meeting with the Puseys developed. This is occasion for some high comedy, subtly of a class nature. Of a different, more typically Brooknerian sort, are Edith's memories of her disappointed mother. We find ourselves in heavy Viennese interiors, and later in the Kunsthistorisches Museum, looking at a painting that could be Bruegel's Land of Cockaigne (but that's in Munich) or else The Harvesters (which is in the Met, New York).

One further point: the 'veal-coloured' decor of the hotel. Veal is an unEnglish meat; I never ate it until I went abroad. In the Eighties and Nineties, UK involvement in the European veal industry was roundly condemned in the British tabloids, and I think there was legislation as a result. 'Veal-coloured' is therefore a peculiarly Continental choice of words. 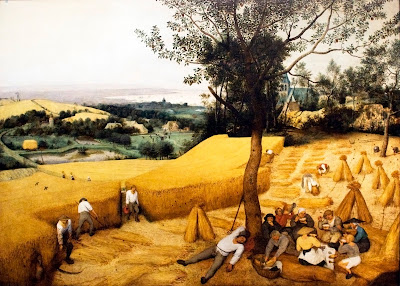 Posted by The Brooknerian at 06:13