They conferred on him the function of master of the revels. As each golden day succeeded the last they imagined that they saw in him the spirit of summer incarnate.

Everything in Brookner comes back to Watteau, the subject of her first important study in art criticism. In chapter 6 of Incidents the 'very sexy' atmosphere she spoke of takes, as it were, centre stage, in the enchanted atmosphere of a French summer. Everyone assumes roles, the old, the young, and Tyler is the undoubted star. Brookner depicts the scene with sureness, as though it were a painting, and Tyler one of the gods.

The following are the Watteau in the Staedel in Frankfurt and a few lines from Brookner's 1967 monograph. 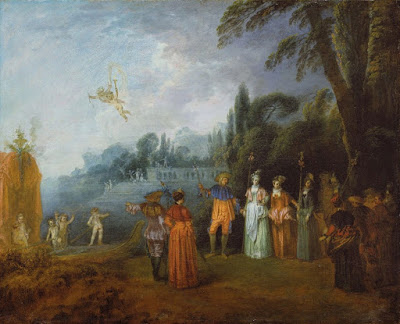 The women he paints have a sparkling miniature solidity, the men an engaging quirkiness, a sharpness of knee, an intense turn of head which prompt admiration for Watteau's realism; yet these sharp little characters who, even in repose, seem always to be pouting, to be urging, to be inclining their tiny thoughtful heads, exist in a vacuum of apparent purposelessness. Their clothes, of satin slick as the oil into which Watteau translates them, are beautiful, flimsy, and bizarre; the context in which their languid activities take place is grandiose and vague, like a stage set. They look, in fact, like a group of professional actors, either warming up half-heartedly for a performance or enjoying a break in rehearsal, falling into a day-dream while a musician improvises softly on his guitar.

Posted by The Brooknerian at 13:45