'And it is not true that people have nothing to fear, if they speak the truth. They have everything to fear.'


No blame should attach to the telling of the truth. But it does, it does. We know that from Anita Brookner, before whom there was Ivy Compton-Burnett. In fact she's quite a different kind of artist, though there are a number of congruences. Both began publishing regularly and in earnest in the second part of their lives. Both presented the public with a carefully maintained and very austere public image. Both had what can at best be described as a less than rosy view of the world. 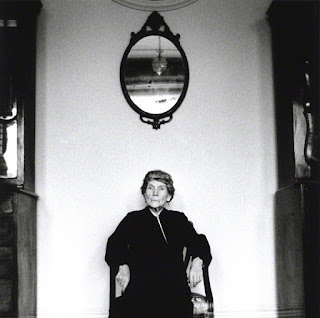 Just as I became interested in Brookner during the time I worked in a public library, so I came to Ivy Compton-Burnett among the stacks. The Penguin A First Omnibus always attracted me, and I tried to read it. It baffled and defeated me. I tried again years later, and registered a similar response. For those who aren't initiated, let me set out the basics. ICB was an English writer who wrote her major works between the 1920s and the 1960s. They're predominately set in upper-middle class households during the last years of the previous century. They have highly sensational and even shocking plots. They're written almost completely in stilted, aphoristic, and faintly camp dialogue. The narrator mainly stays 'on the surface', but allows herself random access to characters' less admirable thoughts. Physical descriptions are brief and formulaic. Descriptions of settings are practically non-existent. The tone of most of the characters' exchanges is harsh, astringent, cruel. ICB's novels are extremely frustrating, extremely odd, but rather addictive. They're unlike anything else. Henry James's The Awkward Age and the novels of Henry Green come near, in that they rely on dialogue, but no one gets close to Ivy's brutality.

Two Worlds and Their Ways is a middle-to-late period Ivy. She had her heyday in the second war: Elizabeth Bowen wrote, in 1941, 'To read in these days a page of Compton-Burnett dialogue is to think of the sound of glass being swept up one of these London mornings after a blitz.' The wartime public seemed to appreciate the formality and honesty of Compton-Burnett's novels: 'the effect of stiffness and surface distortion no longer seemed a problem in a world where the comforting half truths, cliches and conformist platitudes of conversations were temporarily in abeyance,' writes Hilary Spurling in her introduction to the Virago edition of the novel.

After the war Ivy Compton-Burnett's novels became shorter and even more rarefied and concentrated. Two Worlds and Their Ways is heading in that direction. Nothing is wasted, though there are long passages that seem to be heading nowhere. She's like a pianist improvising. Only she knows where she's going. Where she's usually going is in the direction of revelations, realisations and discoveries that can be profoundly horrifying.

Compton-Burnett's theme in Two Worlds and Their Ways, as ever, is power and its misuse:


Clemence lifted her eyes in incredulous consternation. Surely human beings could not have such power over each other and yield it thus without thought or mercy.

The 'two worlds' are home and school. Both are charnel houses. The child Clemence and her younger brother Sefton are sent away to boarding establishments, where both commit similar offences - offences that eerily mirror the behaviour of their relations at home. There are lessons for everyone, lessons in the true nature of what one character calls 'this hard, unhappy human world'. By the end of the novel all pretence has been taken away, all shameful secrets revealed, including a particular secret involving the theft and sale of an earring, which Compton-Burnett, not without relish, covers in inordinate and painful detail. No one, at the close, can be in any doubt about anything. 'And that is hardly an enrichment of our family life,' comments one of the children.

Posted by The Brooknerian at 06:13