Gallery-going nowadays can be a strain. Warders have been made into martinets: you must walk in this direction, wait here, move on, never linger. Some appear resentful you should wish to indulge in anything as frivolous as art. In the Palace of Holyroodhouse I asked a question about a painting of George IV's visit to Edinburgh in 1822. Who was the man kneeling before the king? The kilted attendant performed a pantomime first of not hearing - I had to repeat - then of appearing not to recognise my words as English. I said again: 'Do you know who is presenting a gift to the king?'

Eventually, sulky, and with unaccountable emphasis: 'The Duke of Hamilton.'


The palace is picturesque, laid out and furnished in decadent Carolean style. Beside the house rises the wildness of Arthur's Seat.

The art, like much in royal palaces, is hit and miss. Some, such as a whole hall's worth of hastily painted pictures of every Scottish monarch, including the legendary (they've all been given Charles II's nose), is poor. As always, sooner or later one finds a Cranach, this one an Adoration of the Magi: 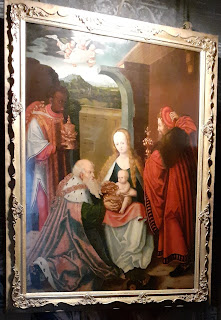 I liked this Lely of Catherine of Braganza: 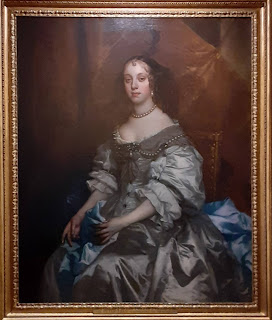 My afternoon was similarly mixed: hounded by warders round the few spaces deemed safe in the Scottish National Gallery. Much is missing. I noted this Cranach, an Allegory of Melancholy... 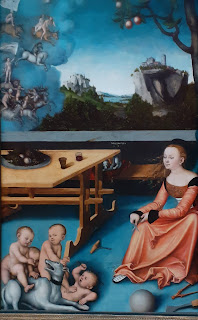 ...enjoyed seeing this James Drummond of the Porteous Riots, a real event and scene in The Heart of Midlothian... 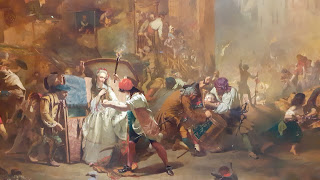 ...and marvelled at this Tiepolo sketch of Antony and Cleopatra - just because it's Tiepolo. I sense quite a few Brookner personages would have been drawn to this marvellous light-as-air picture, not just Blanche Vernon.

Posted by The Brooknerian at 06:57