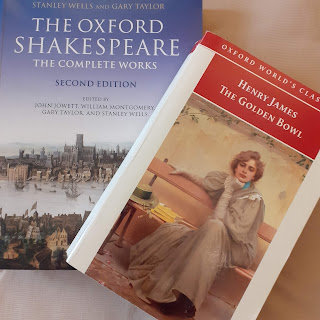 I beguile the time with Shakespeare and James. I'd left Trollope's Vicar of Bullhampton on the shelf for years - years after I read the rest of Trollope - and I must have sensed why. It's a dull book, but with everything going for it: characters high and low, intriguing issues (sex work, daringly, among them). But it has little jeopardy, the conventional love story is dreary, and the prostitution (Trollope uses the word) theme proves hesitant and too slight: Trollope veers between sympathy and condemnation. We never see Carry Brattle's life in London. There are no Clarissa-style scenes.

Henry IV Part 2: Was there ever such a perfect play? The high and the low here complement one another. It would be formulaic, if it weren't brilliant, the way we alternate between the poetry of the court and the prose of Falstaff's world. The story, concerning various plots and treacheries, is negligible. What matters is the language. The King and Falstaff are given the best speeches: 'Uneasy lies the head that wears the crown' in Act 3, Falstaff's tribute to sherry in Act 4. Then there's this, from King Henry, later in the same act:


my grief
Stretches itself beyond the hour of death:
The blood weeps from my heart when I do shape
In forms imaginary th’ unguided days
And rotten times that you shall look upon
When I am sleeping with my ancestors.

And so to James. From only the second chapter of The Golden Bowl, on Fanny Assingham (a character name David Lodge has, at James's expense, a little fun about):

Type was there, at the worst, in Mrs Assingham's dark, neat head, on which the crisp black hair made waves so fine and so numerous that she looked even more in the fashion of the hour than she desired. Full of discriminations against the obvious, she had yet to accept a flagrant appearance and to make the best of misleading signs. Her richness of hue, her generous nose, her eyebrows marked like those of an actress -these things, with an added amplitude of person on which middle age had set its seal, seemed to present her insistently as a daughter of the south, or still more of the east, a creature formed by hammocks and divans, fed upon sherbets and waited upon by slaves. She looked as if her most active effort might be to take up, as she lay back, her mandolin, or to share a sugared fruit with a pet gazelle.

Posted by The Brooknerian at 06:50