Among several scuppered plans was a visit to see the Titian exhibition at the National Gallery, now closed. Seven late masterworks were included, reunited for the first time since they sat in Titian's studio in the second half of the sixteenth century. Paintings would take years, returned to after long absences. 'According to eye witnesses,' writes Martin Gayford, lucky enough to see the show, in this week's Spectator, 'Titian would begin a work, then lean it against the wall. Some time later he would scrutinise what he had done as if it were a "mortal enemy", add a touch or two, set it aside again to dry - and so on until he was satisfied ... there is a controversy about whether some of his late works ... were finished or not.'

Brooknerians will know Titian from the much earlier Bacchus and Ariadne, part of the National Gallery's permanent collection. In The Next Big Thing Julius Herz, one of Brookner's later and most debilitated protagonists, finds consolation and also challenge in front of the painting, its 'shock of blue' and the 'charged glance' that passes between the truant god and the mortal abandoned woman on Naxos. Herz feels 'suddenly faint', excluded from such a world of youth and easy conquests. Other gallery 'pilgrims' (a Brookner word - she spoke of herself as one such) pause before the picture, puzzled but moved to recognition: the recognition that what Bacchus and Ariadne have found is 'the real thing'. 'Quite simply', Brookner tells us, 'nothing could take its place.' 'Even to see it, to hear about it at second hand, was enough to cause wonder. Or indeed dismay.' Bacchus, of course, will grow into a 'sozzled wreck'; the story ends badly. Even so, Brookner honours the matchlessness Herz witnesses in Titian's image. And love, as she said in interview, was ever her theme: all the rest was mere literature. Her standards were always the highest: and there's something joyous - never bleak - about that. 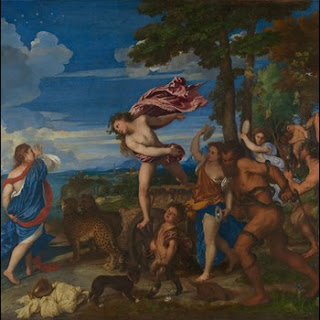 Posted by The Brooknerian at 12:12