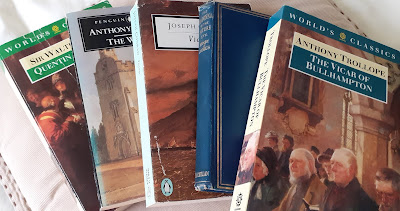 Seeking solace can be a tricky business. As the news worsened I immersed myself in the novels of the past; but the serpent of unease wriggles beneath the seemingly most innocent of flowers. Yet literature is perhaps only great when it is also subversive.

Scott's Quentin Durward depicts a young Scottish gentleman abroad in the forests of fifteenth-century France. So far so sylvan and romantic, but Scott has other ideas: at pains to emphasise the anachronism of Durward's devotion to chivalry in a world of low politics that has left such ideals behind.

Trollope's The Warden should be safer territory, I thought. I read it years ago. Indeed it retains much charm: Trollope, we might recall, conceived the novel while wandering one midsummer evening the tranquil environs of Salisbury Cathedral. But modernity intrudes, the eschewing of tradition and the beginnings of a soulless corporate sensibility in Mr Harding's ejection from his comfortable but unjustifiable wardenship.

I next read Victory by Joseph Conrad, the tale of Axel Heyst, who has 'perceived the means of passing through life without suffering and almost without a single care in the world - invulnerable because elusive.' But the book's tone, as so often with Conrad, shifts constantly and unsuccessfully, and by the end a contemplative novel has become a rather repellent violent thriller.

In 'The Madonna of the Future' Henry James takes us to Italy in the 1880s and the full lucidity of his nevertheless supremely sophisticated middle style. The narrator befriends a fellow American who once planned to become an artist. But he hasn't noticed the lapse of the years, the withering of his talent, and of his muse, now a vulgar matron. A delightful bonne bouche.

I turn finally to The Vicar of Bullhampton, a mid-to-late Trollope I've somehow never read before. And again, what promised to be idyllic is actually rife with trauma and disruption, as the well-meaning eponymous hero struggles to improve the lives of his parishioners - including, daringly, the 'castaway' Carry Brattle - and gets precisely nowhere.
Posted by The Brooknerian at 06:06