'Bill Sikes and the prostitute Nancy', reads the blurb of the current Penguin edition of Oliver Twist, promising spice that isn't quite warranted. Dickens's text is altogether less specific - indeed not specific at all. The most we hear is that Nancy has been groomed by Fagin into a life of thieving, like the Artful Dodger, from a young age. And George Cruikshank's famous illustrations present her as a somewhat homely figure, certainly older than she is suggested to be in the novel. 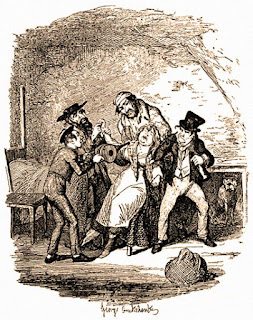 David Lodge has marvelled at Dickens's capacity to avoid in his writings any mention of the sexual life; and the question of Dickens's own illicit experiences in London and elsewhere have puzzled biographers, though Claire Tomalin's book about Nelly Ternan dredges up a letter to a friend, a letter in which Dickens speaks of 'conveniences of all kinds at Margate (do you take me?) And I know where they live'.
Posted by The Brooknerian at 17:06