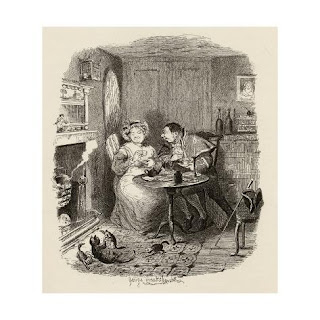 The serial publications of Dickens's very early novels The Pickwick Papers and Oliver Twist overlapped, confounding some readers. The easy geniality of the former was at odds with the harshness and cynicism of the latter much shorter, less expansive novel. 'It's all among Workhouses, and Coffin Makers, and Pickpockets ... I don't like those things; I wish to avoid them,' commented Lord Melbourne, the prime minister.

I haven't read Pickwick for some years, but I remember a happy time. A heavenly Christmas episode stays in my mind. I marked it down as a reread for future times of strife; I've had need of it since, but somehow haven't returned.

Oliver Twist is indeed rather relentlessly bleak and dispiriting - and therefore, perhaps, unDickensian - but one seems to reach an interlude at the beginning of the second Book, when Mr Bumble visits the appalling Mrs Corney, the workhouse matron. The tone shifts throughout the scene, starting with Bumble in regular bumptious beadle mode and Mrs Corney as heartless as ever. But then follows a love scene between the pair that is certainly ridiculous but also cosy and rather warm. We're in a different novel suddenly, the sort of light-and-shade affair that would later become Dickens's hallmark.

But then abruptly appears a 'withered old female pauper' with shocking news: 'old Sally is a-going fast' - to which Mrs Corney responds with her usual asperity. We're back to base with Oliver Twist.

The chapter ends curiously. Mr Bumble, left to himself in Mrs Corney's parlour, dances 'with much gravity four distinct times round the table'. Dickens finds such behaviour 'inexplicable', and we might concur, while also having some inkling as to the beadle's thoughts. Oliver Twist as a whole is hard to ignore or indeed like, but harder still to come to a conclusion about: an orphan, a foundling among the wider Dickens family.
Posted by The Brooknerian at 06:59