A Report from the Front 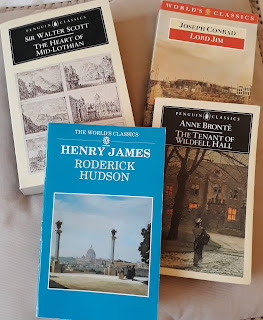 ...an art, if not of actual improvisation, then of rapid execution, of kaleidoscopically swift movement across a mental landscape of remembered physical reality, imagined characters and events and literary texts, quotations and narrative figures both actual and postulated.

Tony Inglis, Introduction to Scott's The Heart of Mid-Lothian, Penguin, 1994

Who cannot fail to be seduced by such a depiction? It's the dreamlike vividness of Scott that fills my imagination as I read further and deeper into his world. And the relationship with literature. When literature is one of the most important things in your life, you can't help but call Scott a kindred spirit. And it's the three-dimensional quality he conjures in your mind - like Dickens, but less ordered, more reckless than Dickens. Things, you feel, might go absolutely anywhere. Or rather, perhaps, the four-dimensional - for Scott is all about time.

I'm reminded of Virginia Woolf's peerless comment on The Antiquary:


the scene in the cottage where Steenie Mucklebackit lies dead; the father's grief, the mother's irritability, the minister's consolations, all come together, tragic, irrelevant, comic, drawn, one knows not how, to make a whole ... which, as always, Scott creates carelessly, without a word of comment, as if the parts grew together without his willing it, and broke into ruin again without his caring.

Elsewhere I've been reading - or rereading - Roderick Hudson, an early novel by Henry James. I say rereading and I say early, but there is always a factor to be borne in mind with James: the question of our texts. Roderick Hudson was written in the 1870s and then heavily revised thirty years later. I read the novel in the later version, with the earlier edition near at hand: something of an arcane activity, and certainly dilettante - but hey. In fact you don't need to check where the later James hand has been at work. It's obvious. Much of the text is 1875, with minor adjustments. But then there comes a sudden flowering of extended metaphors - metaphor upon metaphor - and you know you're now in Lamb House and it's 1907.

The Tenant of Wildfell Hall: I'm not especially a Brontë fan, but recently I've been reading according to a new regime. Whatever appeals in charity shop, I buy and read. It's a long novel and consists of a central flashback sequence told in diary form. Some have criticised this structure, but it seemed to me strikingly modern, or modernist: rather 1930s (I'm thinking of The House in Paris or Tender is the Night). The tone of the novel is striking. We're far from the tradition of the English comic novel. Anne Brontë is relentlessly sober, serious, minatory. Rarely in English fiction is drinking so demonised.

Last of all I've been reading a spot of Conrad: Lord Jim. Lord Jim, like the Brontë, also plays with narrative and narration, but much more radically. It's the story of a young man whose progress is eclipsed in a single confused moment. It's about failure, and the glamour of that failure. The first two thirds are brilliant, the last section harder to navigate.

In April I was in Berlin. I visited the palace of Sans Souci, in Potsdam, having enjoyed Waldemar Januszczak's BBC series on the Rococo. I should have done a little more research, because it's actually several palaces spread over a vast campus. I was quite tired at the end of that day. Back in Berlin I looked up old haunts, among them the museums in the Kulturforum, viewing paintings, viewing porcelain, adding to my collection of postcards, though I didn't buy one of Gainsborough's Joshua Grigby, because it didn't quite reproduce the 'subtle pink' of the man's coat, so lauded by Brookner in her novel Latecomers. 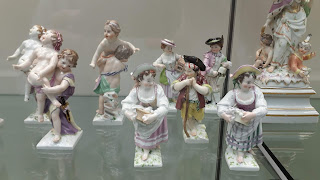 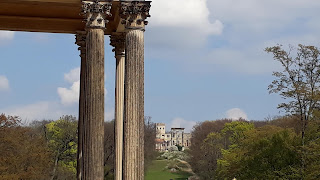 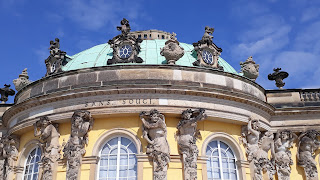 Posted by The Brooknerian at 13:01