'Mute oblongs' Brookner calls the photographs Herz lugubriously sifts in The Next Big Thing. A photo sets the ball rolling in Family and Friends; and a Brookner favourite, W. G. Sebald, of course, began the vogue of actually interspersing tracts of text with wordless rectangles that at once somehow reveal and remystify the past.

All photos, of whatever age, are both accessible and resistant. I've considered this in recent weeks as I've traded a collection of cartes de visite I picked up in a job-lot years ago. Patented in the 1850s, this species of visiting card became extremely popular in the following decade. (Oddly enough, I cannot think of references to cartomania in novels of the time, though the likes of Trollope and Thackeray both trotted down to one of the numerous studios that sprang up everywhere. There is an image of Thackeray wearing trousers so aged they have patches on them.) Suddenly the past bursts into the light. The thousands of people, famous and unknown, who posed have a watchful look, not unlike the Tudor noble men and women we see in the drawings of Holbein.

Also fascinating is the community of collectors, and what appeals. I sold cheaply a fishwife scene, little realising Victorian tradespeople were much sought after. A face with character, something indefinable, sells fast, full-length images are preferred, older men are hard to shift, a pet will be snapped up.

The cartes below range from the 1860s to the 1900s. The gentleman in the centre is named, an undistinguished man, but his dates are to be found on the Internet. The girl in the bottom right is one Clair Barth of Bern. The scrawl on the back is otherwise inscrutable. But it is something. Most of these oblongs, of which there are many hundreds on auction sites, remain entirely mute. 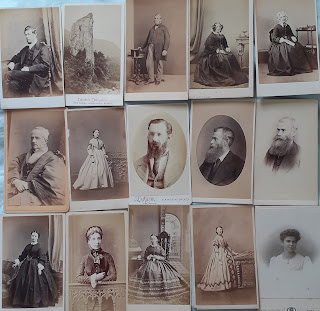 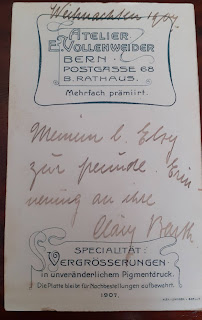 Posted by The Brooknerian at 11:28