And so we come to the end of A Misalliance. A minor Brookner in some ways, a little under-powered, and tonally variable. A novel other writers probably wouldn't have written. Others would have let a fallow year go by. But not Anita Brookner.

And yet I'm glad we have it.

The closing chapter is a classic Brookner conclusion, though you probably wouldn't have known it in 1986. But now we see all the familiar things. The urgent desire to travel. Seasonal change. The wistful ending of a misalliance and the throwing in of one's lot with altogether safer concerns. And a sudden last-paragraph reversal.

No, I rather like A Misalliance. Unlike its creator I wouldn't dismiss it with the Ratner word. 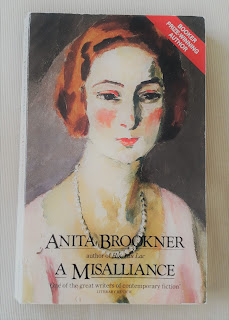 Posted by The Brooknerian at 16:21