Civil to Strangers by Barbara Pym


Lines from Thomson's refined poem 'The Seasons' open each chapter of Barbara Pym's 1987 novel Civil to Strangers. Except that it wasn't written in 1987 but in 1936. Rarely do authors enjoy such prolific afterlives as Pym, who died in 1980. Civil to Strangers, her second novel, written in her twenties (her first was Some Tame Gazelle, not published till 1950), has a slightly uncanny timeless quality, not only because of its unusual publication history, but perhaps because of the way Barbara Pym saw the world, or did then. There is no sense of the passing of time, of time being finite. Everything has the potential to be comfortable and contented. Young characters dream of genteel retirement, but it's a state they envision lasting for ever.

The novel, published as part of a longer collection, is short and light. It tells the story of Adam and Cassandra Marsh-Gibbon, a young married couple living in a Shropshire village. Adam, a not too popular novelist, is kindly but vain and absent-minded. Cassandra is sensible and Pymish. Other characters include the local rector and his wife, a curate (of course), a Mrs Gower, a Mr Gay - and a Hungarian interloper Mr Tilos, who falls (moderately) in love with Cassandra. There follows a trip to Budapest, which promises much but ends decorously. The journey includes a stop in Frankfurt in Germany, of which Pym says little. And this is 1936. But Cassandra has met a party of English tourists, including one Canon Coffin, so naturally there are other things to draw her attention.

Is Civil to Strangers anything more than a literary curiosity? Probably not, but it's interesting certainly to see how early Barbara Pym found her authentic 'voice', which is difficult to define - cosy? ironic? - but evident in every line. But I don't think she found her subject until later, in darker novels where the passing of time is an ever-present threat.

(Anita Brookner, in one of her last reviews (here), gave an assessment of Civil to Strangers. Brookner was appreciative of Pym, if a little lukewarm.) 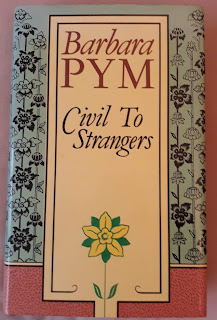 Posted by The Brooknerian at 08:17