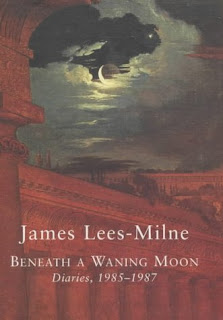 James Lees-Milne, sharp, catty, camp, Edwardian-born gentleman of letters, one-time Country Houses Secretary at the fledgling National Trust, sported in his later years a slightly risible halo-style 'do'. When, in June 1986, he goes with an old chum to the Royal Society of Literature to listen to Anita Brookner's lecture on the Brothers Goncourt, he finds himself distracted by her hair: 'like a bird's-nest, but tidy,' says he.

He calls her 'a funny little woman, sharp, delicate features, slight of build, soft-spoken'. Her lecture is excellent, and inspires him to read the Goncourts' novels. But, he tells his friend, afterwards he remembers little of what she said (perhaps because he was thinking rather too much about her riah).

It often surprises me (but it probably shouldn't) how infrequently Brookner's name crops up in the diaries and letters of her contemporaries. A couple of mentions in the Roy Strong journals, but practically nothing elsewhere.

Brookner suggested she was a 'devotee' of Lees-Milne when she chose Michael Bloch's biography of the diarist as one of her 'Christmas Books' in the Spectator in 2009 (here). She took the opportunity to set out what were perhaps her own preferred criteria for the genre of life-writing:

Posted by The Brooknerian at 13:20