The Smell of Pine Forests

Reviewing with disfavour a book about fathers and daughters (Fathers: Reflections by Daughters, ed. Ursula Owen, London Review of Books, 22 December 1983), Brookner is moved heavy-heartedly to offer her own report from the front:


My father, who has been dead for some years, was a man for whom I felt none of the standard daughterly emotions, either ancient or modern. An exile, modest, diffident, as honest as a child in a world of adult considerations, he seemed to me to compare unfavourably with the capricious, handsome, successful men of my mother’s family. These uncles, as tirelessly expansive as he was reticent, could not bother with a man whose only comment on his translated life was that he missed the smell of pine forests. It seemed to me that he was completely unhappy. This unhappiness did not recommend itself to me, for his vision of the world appeared unlovely when set beside the exciting games of favour, of pleasure, of cynical appraisal, to which the men of my mother’s family gave such vivid attention. My father’s entire morality – and it was entire – found an equivalence in the novels of Charles Dickens, with which he acquainted me at an early age: the uncles preferred me to read the gamesome tracts of George Bernard Shaw. At no time since my father’s death, which I watched, have I dreamt of him or longed for his advice or indeed consciously missed him. But now, strangely, I find my father, and his dreadful simplicity, encoded somewhere in my perceptions: I now feel as he felt.

Brookner ended her reading of Ursula Owen's book, as she ends the review, with a quotation from Little Dorrit, from that letter Amy writes to Arthur Clennam from Venice:

Another difficulty that I have will seem very strange to you. It must seem very strange to anyone but me, and does even to me: I often feel the old sad pity for – I need not write the word – for him. Changed as he is, and inexpressibly blest and thankful as I am to know it, the old sorrowful feeling of compassion comes upon me sometimes with such strength that I want to put my arms round his neck, tell him how I love him, and cry a little on his breast. I should be glad after that, and proud and happy. But I know that I must not do this; that he would not like it ... and so I quiet myself. Yet in doing so, I struggle with the feeling that I have come to be at a distance from him; and that even in the midst of all the servants and attendants, he is deserted, and in want of me. 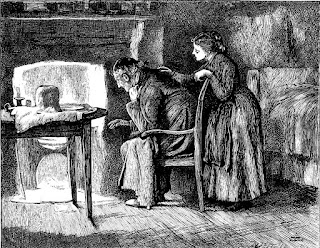 Posted by The Brooknerian at 17:10