Anita and the Landladies 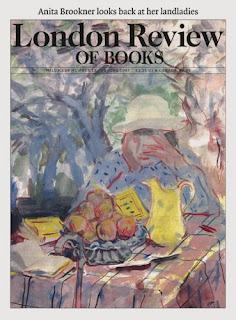 Julian Barnes once said of Anita Brookner that it was hard to imagine a novelist less likely to write an autobiography. She was, he implied, too private, too discreet. And yet she wrote all those novels, none of which pull any punches. And though she gave few interviews, those she did allow are among the most honest and extreme writerly exchanges on record.

Brookner's memoir about her early Paris experiences, 'Mme de Blazac and I',* is extraordinary, unprecedented and sadly unrepeated. It's a long essay describing the author's years in the French capital and her interactions with a number of eccentric landladies.

Mme de Blazac, 'rather than formidable and omnicompetent, as I had imagined from the aristocratic name' proved 'small and tremulous', 'subdued and incompetent' and 'clearly more nervous than myself'. Brookner thus inaugurates a character portrait that wouldn't look out of place in one of her novels. Mme de Blazac is, in particular, Fraud's Amy Durrant in Frenchified form. We see Mme de Blazac's 'tiny hands' pressed to her eyes as, heartbroken, she recounts the details of her sad life. We see those 'still pretty blue eyes' widening with horror as she speaks of being jostled in the local Prisunic.

Like many a Brookner innocent, Mme de Blazac had been prey to a plausible man, now long gone, having 'dropped dead at the tables at Enghien',** and depicted in life as looking like 'a lesser member of the Gestapo'.

There had also been a disappointing daughter, Marie-Odile, who fled to South America, and whom the young Anita went some way to replacing. Anita is visible in glimpses in the memoir: her Englishness is emphasised (Mme de Blazac assumes that, being English, Anita would be 'used to a coarser way of life') - something we often forget when thinking of this most cosmopolitan of women. We hear of the embryonic writer's growing habits of 'concealment', and of her 'largely virtuous' diversions. And we see her looking ahead to her own later years:


our association was peaceable, and I could see myself in years to come much as she appeared to me then, reading the illustrated weekly papers which she enjoined me to buy, emerging cautiously to shop in the rue de Passy, contenting myself with a modest aura of Violettes de Toulouse, and eternally contemplating a journey which I should never make.

We also see Anita as viable and canny and an outsider - the eternal observer. She styles herself, significantly, as an attendant on her landlady:

This is a restful condition, but it precludes one from higher consideration. Attendants, however, can also be dictatorial. I would urge Mme de Blazac to go to bed early, after our frugal supper, if we happened to eat together: ‘Vite, au dodo!’ Mme de Blazac would smile and obey.

And we picture the youthful Miss Brookner, secretive, covert, slipping away into the nighttime streets, going who knows where.

Later we read of other landladies, Mme de Franqueville in the rue Jouffroy, to whom Anita was transferred through the good offices of her friend Louise,*** and Mme Martin in the rue de Tocqueville. At the home of the former, who was 'content to sit in her room reading the memoirs of the duc de Choiseul', there was a degree of antisemitism. At Mme Martin's there was a noisy unmusical son. Anita Brookner - it was by now 1970 - decided a change of circumstances was required:


I took the giant step of installing myself in a hotel. I have rarely been so happy. As a long-term resident I was treated like the lodger, which imparted to the whole exercise an air of continuity. Finally, at home, I continue to behave like the lodger, agreeably surprised that I am allowed to make myself a cup of tea. Heaven may turn out to be a sort of hotel, the bills being sent to another place. Entrance qualifications, however, will remain problematic, although one hopes that that original hotelier’s refusal to provide accommodation, on the grounds of there being no room at the inn, will have been corrected.

'Mme de Blazac' is among the most fascinating of Brookner's many writings. Distanced and ironical - an effect produced by liberal use of the passive voice - the piece nevertheless gives a vivid and rather moving account of an important part of this writer's early life, a part that would feed many of her subsequent fictions.

*London Review of Books, 19 June 1997 - available on the LRB website but unfortunately hidden behind a paywall
**There's a dubious Brookner character in one of the novels who drops dead at Kempton Park.
***I wonder about this Louise. I possess a note in Brookner's hand addressed to 'Louise'; it accompanied a copy of a lecture Brookner gave in the 1970s on Jacques-Louis David. 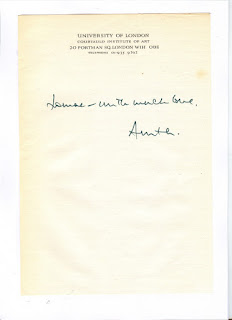 Posted by The Brooknerian at 15:25