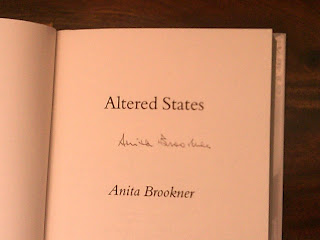 Brookner's novels fall into three not quite distinct phases. Not as distinct as, say, Henry James's 'James the First, James the Second, and the Old Pretender'. Brookner's novels, more uniform, more regular, gradually evolve. But I reckon we can think of the 1980s novels as our introduction to Brooknerland, our first steps inland, and the late novels, those of the 2000s, as the end of the journey. But in Brookner's 1990s fiction we're deep in the interior - we're in darkest Brookner.

So I come to a reread of Altered States (1996). It gets little attention, overshadowed by such better-regarded 90s Brookners as Visitors and A Family Romance. It's unique in the oeuvre in that it's written from a male character's perspective in the first person. Starting it again, after a long time away, I remember little; it's almost (but not quite) like reading a new Brookner.

So join me on an excursion into what seems like the long-ago past, before our strange modern world came properly on.
Posted by The Brooknerian at 06:11