Richardson's novels, far-fetched and of poor quality in any language...

Brookner's chief beef with Samuel Richardson is a well-worn one: his didacticism: 'one was expected to read his novels in the virtuous anticipation of being instructed'. She condemns his 'almost professional assurance that virtue will triumph'; such uplift is 'spurious'. And she has her suspicions that many of his readers would have gained 'more than a little excitement' from the more lurid aspects of his fiction.

I don't often disagree with Anita Brookner (I probably wouldn't be writing this if I did). I agree with her as far as Richardson's first novel, Pamela, is concerned, a dull and ridiculous book if ever there was one, and I haven't read his last, Sir Charles Grandison (who has, other than Jane Austen?), but I tend to think of Clarissa as one of the greatest novels in any language - absorbing, immersive, and not a little mad. Clarissa set out the rules of engagement for all the great psychological novels that were to come, not least among them the novels of one Dr Brookner. Perhaps Brookner struggled with the not inconsiderable logistics of reading such a monstrously oversize text, no readable printed edition of which has been available for some time. I recently read Clarissa over the course of a year on my e-reader. It's what Kindles were invented for. 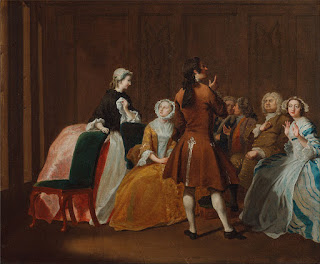 Posted by The Brooknerian at 06:07