From the terse to the lyrical, Anita Brookner’s opening lines are often memorable.

Dr Weiss, at forty, knew that her life had been ruined by literature.

With concision and aplomb Brookner sets out her stall. This is how to get yourself noticed.

Julia died. I read it in The Times this morning.

My French friend, Marie, never a Brookner fan, disliked Brief Lives, especially the opening; she objected to its bleakness and negativity. ‘Yes – and?’ I probably replied. It’s certainly a startling start to a novel, and if this almost gnomic line hasn’t found its way on to a T-shirt somewhere, then someone is missing a trick.

My mother read a lot, sighed a lot, and went to bed early.

A beautiful, rhythmic sentence, with Proustian resonances – and that second comma is surely the mark of a stylist (Brookner, in one of her book reviews, praises an author’s use of such a comma). Of course, reading a lot and sighing a lot and going to bed early are just the sorts of Brooknerian behaviours decried by Brookner’s more hostile critics. But Brookner enjoys baiting her detractors.

Towards evening the oppressive heat was tempered by a slight breeze, although this merely served to power drifts and eddies of a warmth almost tropical in its intensity.

Reminiscent of the opening of Hotel du Lac (‘From the window all that could be seen was a receding area of grey’), Visitors introduces its protagonist hesitantly, tentatively. We are aware of an observing consciousness, but it will take several sentences before Dorothea May emerges into the light. The passivity of the grammar serves to enhance and illustrate that same quality in the heroine.

Sturgis had always known that it was his destiny to die among strangers.

We get to know Mrs May gradually, but many of Brookner’s protagonists, especially the guys, are introduced more directly (‘Herz had a dream’ – The Next Big Thing). In Strangers Brookner has an urgent story to get on with. This is brutal, uncompromising stuff, and there’s simply no time to be lost.​ 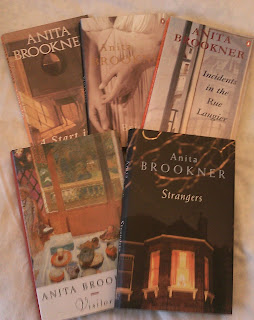 Posted by The Brooknerian at 17:08