It was dusk when he reached Berlin,and a huge dark blue sky, moonless and starless, stretched over the curiously silent city. He realised that he was unaccustomed to these quiet wide streets, these blank-faced apartment houses with their austere windows, this isolation of a landlocked place far from the winds of the sea and the subtle odours of grass and river water ... His taxi took him efficiently to the Kurfürstendamm, where the sky was momentarily obliterated by city lights, high buildings bearing advertisement signs like heraldic devices or the badges of ancient guilds, the outline of a ruined church which reminded him of a rotten tooth, and cautious tables outside cafes at which nobody sat. At the Kempinski the welcome was efficient, smiling, deft, but lacked, he thought, effusiveness. 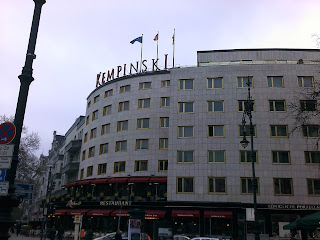 ... Dahlem was much more like what he expected to remember, a suburb of silent villas painted yellow, with pitched roofs and green shutters. The museum, like a giant funeral chamber, rose among ragged tangles of bramble ... He winced at the contorted, almost corrupt, nudes of the German school ... smiled with recognition ... at an English face ... Gainsborough's Joshua Grigby, alert and confident in his subtle pink coat, threatened by the rocks against which he posed or by the lowering grey sky under which he so aristocratically lounged. A fiction, Fibich knew, but what a reassuring one, and he gained a little courage from it ... Lansstrasse, Fabeckstrasse ... The Hansel and Gretel houses disclosed no inhabitants ... He felt at home, and not at home ... stricken by this fatigue du nord which hung over Berlin...

[I visited the Dahlem museum, but whatever it was at the time of Fibich's visit it is no longer: all but unvisited rooms house fairly random ethnographical items united only in their dullness. There are no paintings. I was told there hadn't been paintings for many years.]

[Joshua Grigby is now in the Gemäldegalerie in the Kulturforum. Visiting a gallery to see a particular painting, known from literature, has a special appeal. There is always a thrill when you turn a corner and there it is, the very picture Fibich (and Brookner) stood before.] 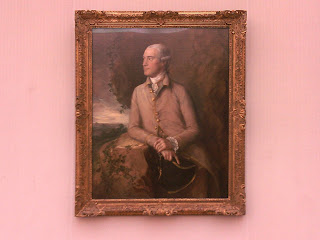 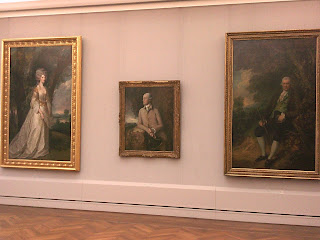 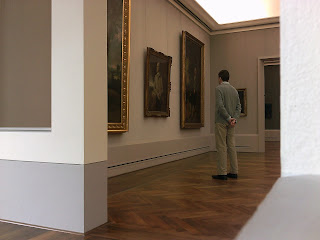 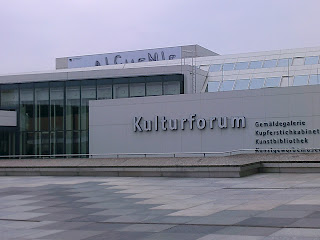 Charlottenburg ... He joined the crowd ... shuffled miserably through the ugly rooms with their coarse gilding and parvenu display of blue and white porcelain.

[I've been to Charlottenburg before, and nothing would persuade me to endure it again.]

He took a taxi back, sat at the Cafe Kranzler, furtively ate two slices of strawberry shortcake.

[The Kranzler no longer serves strawberry shortcake or indeed very much food at all. Coffee and tea of some complexity are on offer, the latter presented in an imprecisely oriental manner. The place was almost deserted. An arty young woman took pictures of coffee cups and bags of coffee, probably for promotional purposes.]

He began to treat himself more kindly, dropped his guidebook into the wastepaper basket, stayed for long hours in his quiet room, emerging only for meals, for a gentle stroll to the shop that sold English newspapers, to the Kranzler, or, for lunch, to the Paris Bar.

Posted by The Brooknerian at 08:40