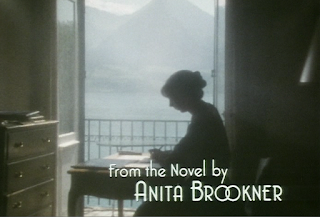 However often I watch it, I'm always surprised. A film of an Anita Brookner novel seems as outlandish as an adaptation of, say, late James. But The Golden Bowl and, more skilfully, The Wings of the Dove have been successfully translated to the screen in recent decades. Their plots, though, underneath the verbiage, are very simple, even sensational. Hotel du Lac, similarly, is one of Brookner's more structured, plotted works.

Rights to the novel were bought before its Booker success. Initially Anita Brookner had been approached to write an original screenplay, but she said she wouldn't know how to. Instead she offered the soon-to-be published Hotel du Lac. (This is revealed in the 2002 commentary that accompanies the DVD of the 1986 TV film. The commentary is a dull, low-powered affair. No Brookner, of course.) 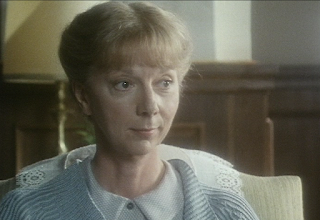 Anna Massey plays Edith. I've often found Massey a distractingly distinctive actor. Like Judi Dench she manages somehow, in any role, always to be herself.

Most of the rest of the cast, especially in the Swiss scenes, are, like Massey (my last comment notwithstanding), very fine, especially Denholm Elliott.

The London scenes are less successful. The actors in these sections have to create characters out of scant material, and some of them are working too hard. Laboured, meaningful acting isn't helped by a wistful score, which, conversely, suits the Swiss sections.

Criticism often centres on the film's poor picture quality. It is assumed, wrongly, that this is just something we have to put up with in a TV show from the 1980s. This isn't necessarily true. If the original materials exist, the film, which was indeed made on film, may be significantly restored, even to a pitch that exceeds the original broadcast version. This is seen in the restoration work done on film sequences in classic-era Doctor Who. A remarkable example of such restoration is described on the DVD of the 1980s story 'Black Orchid'. But I guess the Doctor Who DVD series had a bigger budget than the DVD release of Hotel du Lac.

Posted by The Brooknerian at 07:33