In my youth I worked in a library; the place was more Tissy Harper than Lewis Percy. But it was big and well resourced and there were many opportunities for private study, which for me meant Brooknerian study. There was a microfiche of things like The Times going back years, and a full range of the current daily papers and other public prints.

In August 1991, one hot dusty afternoon, I went out to collect the Evening Standard from a local newsagent's (this was one of my tasks), and was astonished to find a full-page article in it about Anita Brookner. 'Daring to question the morals of Miss B' by David Sexton, which I photocopied for my further instruction, was extraordinary. Even today, in this age of Internet trolls, and knowing as I do how sharply Brookner can divide opinion, the article seems extreme and unnecessary.

'Anita Brookner has always denied her novels are about herself, but DAVID SEXTON discovers many parallels between the writer's characters and her curious private world.' Her curious private world: but Sexton offers little to substantiate this insinuating phrase. We read the old story of how she shaved ten years off her age when she first became a novelist, and we are told that her desire for 'six sons', expressed in the Haffenden interview, is 'breathtaking' and almost alienates sympathy.

Sexton's main argument, if it can be called that, is rather showily feminist. 'Her view of life is simply false on several counts. It is possible for a woman to be happy in other ways than having a man and children ... The good may triumph over the wicked. These truths are obvious.'

He goes on to say he doesn't think her life has been so bad, citing her successes and mentioning her well-heeled upbringing and the fact that her parents were Jews...

But Sexton, like Mark Lawson (see an earlier post, 'Second Thoughts') recanted. A trawl of the Internet reveals on Amazon the following Evening Standard review of Strangers (2009):

Strangers is, in its own way, definitive. A more frightening, demoralising account of how hard life can be, without work, and above all without family, would be difficult to conceive...Brookner has given classic expression to what she sees to be a central truth of the human condition, absolute loneliness at the last...nothing less than a great horror story.

So, what had changed since 1991? Had Brookner changed? Had Sexton?

And I? I try to picture my younger self and understand him, that young man in a public library on that grimy August afternoon. What were his thoughts? Why was he an Anita Brookner reader? Why was he so thrilled and outraged by the article he had read? Was he yet a Brooknerian? 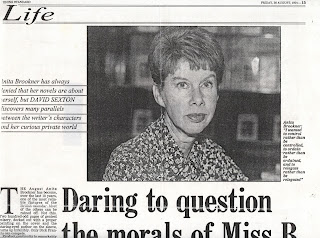 Posted by The Brooknerian at 06:52