Dr Brookner and the Servants

Anita Brookner is probably the last English novelist to write about servants. As late as Strangers (2009) we meet a comic caretaker ('Call me Arthur'), with his plans to retire to Essex and possible ambitions in the direction of underfloor heating. Such details carry all sorts of class-conscious freight. Essex, for the benefit of foreign followers of this blog, has a particular reputation in the popular British imagination, and as for underfloor heating... We're back in the territory of the Livingstones in A Friend from England, and all their pools-funded vulgarity.

Arthur himself has several forebears, notably the Dickensian Hipwood in A Private View. Then there are all the female chars and retainers, with their comic ramblings and salty turns of phrase. 'Class and caste distinctions were the lingua franca of insult and comedy,' writes my old tutor Alison Light of Interwar mistress-servant relations, real and fictional, in Mrs Woolf and the Servants (Fig Tree / Penguin, 2007). Dr Light was, I recall, no fan of Brookner. She didn't much approve of Virginia Woolf's attitudes towards her servants, but was (and probably still is, for all I know) a serious Woolf fan, and a fan will forgive almost anything. 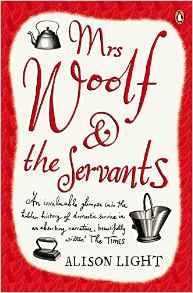 Posted by The Brooknerian at 15:04

Email ThisBlogThis!Share to TwitterShare to FacebookShare to Pinterest
Labels: A Friend from England, A Private View, Strangers, Virginia Woolf