Brookner often takes us to Paris, but not so often to the Louvre. In late, late Brookner, in Strangers (2009), Sturgis gives the Louvre a miss, putting it 'definitively behind him', preferring an 'improvised existence' for which no one will take him to task (Ch. 25).

In gentler, more expansive mid-period Brookner, in Fraud (1992), Anna Durrant dutifully puts in time at the museum. But it is not the 'great discordant machines of the Romantics' that claim her attention but the portraits of Ingres, 'calm, replete, satisfied with their immensely enviable situation in this world, and careless of the world to come' (Ch. 12).

Anna remembers Baudelaire's remark that he found it hard to breathe when faced with an Ingres portrait: he felt as though the oxygen had been sucked out of the atmosphere. This is evidently a favoured description, which Brookner returns to in her essays on Ingres in Soundings (1997) and Romanticism and Its Discontents (2000). Ingres is indeed several times the object of Brookner's somewhat appalled fascination. In the novels we find characters visiting the National Gallery and gravitating towards Mme Moitessier and her impossible dress.* Mme Moitessier is perhaps like one of those Brookner monsters, a Dolly, a Julia, adamantine in her self-regard and unassailability.

In Soundings Brookner discusses the painting at length:


She sits in her crowded boudoir with her famous finger to her temple, dominating with ease her challenging dress. Her gaze is both remote and replete; its descent from the Mona Lisa is not difficult to trace. At first sight it is an arrogant work. Yet on further contemplation the hard-edged image seems to fade and become more opaque, and Mme Moitessier undergoes a transformation from upper-class fortune-teller to Delphic oracle. Nor is this merely a matter of contrasting the personality she presents to us with her mirror image, that not quite accurate reflection seen in a glass darkly, as if the other side of her were in a different room. By concentrating on the shadowy depths of the portrait, and laying emphasis where it is least expected, Ingres endows the foreground with a disconcerting opacity. Central to the confusion of meanings is the door off to the left, a door through which no one will ever enter or leave. 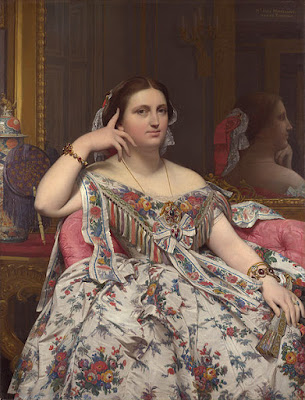 *Unfortunately I can't find the references, but I know they're there.
Posted by The Brooknerian at 08:15