But of all this daily drama of the body there is no record.

Woolf's celebrated essay asks why illness hasn't taken its place with love, battle and jealousy among the prime themes of literature. She considers how common illness is, how 'tremendous the spiritual change it brings, how astonishing, when the lights of health go down, the undiscovered countries that are then disclosed': in short she waxes lyrical. She references Shakespeare, De Quincey, Keats, Proust, all in the opening paragraph, conceding perhaps that Proust and De Quincey did have things to say on the matter. But literature, she tells us, 'does its best to maintain that its concern is with the mind; that the body is a sheet of plain glass through which the soul looks straight and clear, and, save for one or two passions such as desire and greed, is null, and negligible and non-existent'. Interestingly, in view of her own medical history, Woolf's main concern is with physical illness - chiefly influenza.

Woolf asks; Brookner replies. In A Friend from England (1987), Altered States (1996) and elsewhere, characters get the flu, and Brookner's focus on their sufferings, and her descriptions of the effects of illness, effects both physical and as Woolf would say 'spiritual', surely owe something to the earlier writer's thoughts on the subject.


...the experience weakened me at some fairly critical level ... Overnight I seemed to have come into contact with my own mortality. Even when the fever had passed and I was well enough to get up, I moved cautiously, testing my movements, like an old woman ... Those days of recovery were some of the worst I can remember ... I remember spending obscure and submissive afternoons in my small living-room, conscious of the dust I was too weak to displace, feeling subdued and sad as I contemplated the unlovely corners of what had always seemed to me to be a perfectly adequate flat. The iron smell of the over-efficient central heating was in my nostrils as I sat all day ... My attitude to the dark was amorous and fearless: I was more than half in love with easeful death...

A Friend from England, ch. 6

Illness serves as a corrective: one emerges from it sober but diminished. One learns that one's continuation cannot be taken for granted, or, as the poet puts it, never glad confident morning again. My brush with mortality - and it was only a bad attack of the flu - made me grateful and tender-hearted...

There are several things to note. One is Brookner's unwonted quoting of English poets (Keats, Browning), French writers being generally more her thing. (Poets, says Woolf, are the writers we turn to in illness; we are unfit for the 'long campaigns' of prose.) Another is Brookner's emphasis on the emotional effects of physical illness. She does not talk of mental illness. She may be with Woolf there: the mind is a 'slave' to the body; the mental derives from the physical.

Both authors afford illness a special status. It delivers special knowledge, special vouchsafements. Illness is indeed an 'altered state', and it has value. We are as if reborn, remade. As Woolf memorably puts it:


Directly the bed is called for, or, sunk deep among the pillows in one chair, we raise our feet even an inch above the ground on another, we cease to be soldiers in the army of the upright; we become deserters. 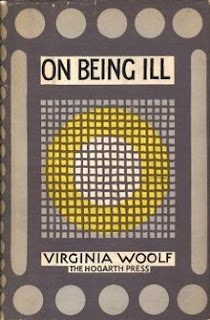 Posted by The Brooknerian at 17:11