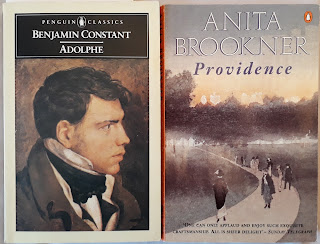 I'm planning a reread of Providence, which makes use of Adolphe, but let me consider Constant's 1816 novel from another angle:


...he thought he might have done better, even prospered, in another era, or even another place, where the natives, the citizens, were more helpful, more curious, and indeed more candid. He longed to have lived in one of those confessional novels he had read as a young man - The Sorrows of Young Werther, Adolphe - in which whole lives were vouchsafed to the reader, with all their shame, yet as if there were no shame in the telling. Here, now, one was consciously checked by a sort of willed opacity, a social niceness that stalled one's attempts to make real contact.

As Brookner said in interview, Adolphe is the story of a moral catastrophe; it's about what you do when you're the cause of a disaster. Adolphe is a bored, ennui-laden young man: he decides the time has come for him to fall in love. He chooses his woman, the mistress of an aristocrat, and she returns his simulated affection - which soon and suddenly becomes the real thing. The 'magic of love' is his, a feeling 'closely allied to religion'.

The woman, Ellenore, leaves her Count, and this is where the problems really begin. Adolphe fast falls out of love, though Ellenore remains devoted - or dependent. He suffers regret, mistakes pity for love, laments his squandered youth, longs to escape, and all the while the years pass by. He's stuck with Ellenore, and she's ten years older, and her attractions for Adolphe can only fade. The novel is unsparing in its presentation of differing male and female desires and expectations. The novel is also about guilt: 'I had crushed the one who loved me, broken this heart which like a twin soul had been unfailingly devoted to mine in tireless affection, and already I was overcome by loneliness.' This is the disaster Brookner speaks of, and naturally there's no good ending.

Adolphe is fairly autobiographical, and this is probably why it's a difficult read: the material hasn't been fully shaped; the story is raw and perhaps therefore rather shocking. There is no payoff: no lesson learnt, no satisfying moment of clarity - though there's one effort in the direction of an epiphany, a Caspar David Friedrich moment ('Daylight was waning, the sky was still, the countryside was becoming deserted) that relieves the narrator a little of his self-absorption but ultimately leads nowhere.

Brookner once spoke of a (male) reader who said to her something like 'You write French novels, don't you?' She took it as a high compliment. One can see what was meant. Adolphe, not just in its subject matter and its psychological intensity, is Brooknerian in its style too: its tendency to show rather than tell; even little things like the habit Brookner has in some of her early novels of not paragraphing direct speech.

Not having picked up Providence for some time, I'll be interested to see how my revisiting of Brookner's second novel is informed by reading Constant's Adolphe.
Posted by The Brooknerian at 19:13