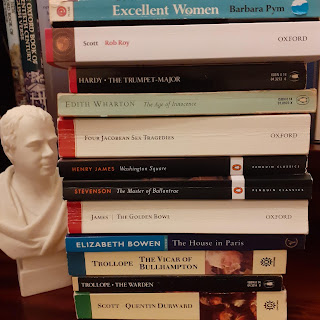 It's traditional to post on Twitter one's reads of the year. I'm not in the same league as those lightning-fast folk for whom the above pile would represent the books digested in an average month, or even week. I'm not sure I feel too much envy. Let slow reading be a thing.
No Anita? a contributor enquired. And it is true: I sometimes take long breaks. I first read her in 1990, and read them all - a mere handful in those days. From then on, yearly, I'd wolf down her novels as they appeared: usually in late August, or so it seems in sunset-lit memory.
I prefer, perhaps, especially at times such as now, a long digressive immersive meandering novel, a novel to get lost in, and the nineteenth century usually supplies. Of the above I think I loved Quentin Durward most. You read it and you're in the nineteenth century again, and yet also in the fifteenth. It's a strange, complex, mazy fantastical reading experience.
(The bisque bust, by the way, is a Robinson and Leadbeater of Sir Walter Scott, c. late Victorian. I bought it in that wonderful little shop, Mark Sullivan Antiques in Cecil Court, London, which always reminds me of the place the Prince and Charlotte Stant pay a fateful visit to in The Golden Bowl.)
Posted by The Brooknerian at 18:53